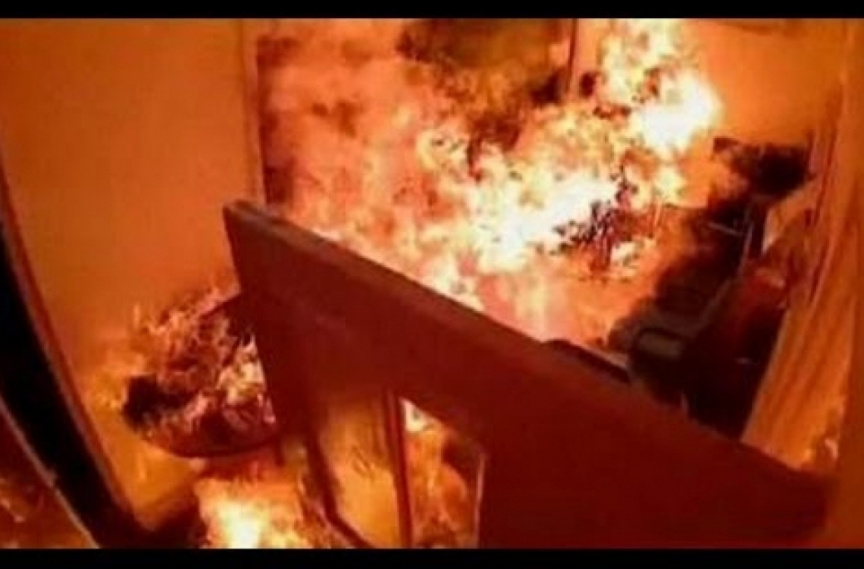 A screenshot from CCTV footage capturing the arson at RaajjeTV headquarters on October 23, 2013.

Criminal Court has sentenced Mohamed Meeadh, H. Gasvaa, for two years in jail over Raajje TV arson – as the charges against him were proven beyond reasonable doubt.

Raajje TV was set on fire by a group of six people who had their faces covered – on the night of October 6, 2013, at around 4:42am. Prior to the arson, the security guard of ‘Queen of the Night’, the building in which the station was being operated at that time, was attacked. Afterwards, the group had broken down the door to the station, poured gasoline on all the work desks and lit the place on fire.

With respect to the terrorism charges raised against Meeadh six years ago – the Criminal Court, today, ruled that the prosecution had provided proof beyond reasonable doubt although Meeadh denies the charges. Therefore, the Court said that he is guilty of carrying out an act of terrorism.

However, his penalty was set under the Penal Code, for criminal damage of property. As per Article 59 (a) of the Maldivian constitution – if the punishment for an offense has been reduced between the time of indictment and the time of sentencing by amending the law, the accused is entitled to the benefit of the lesser punishment. The Penal Code came into force after the Anti-Terrorism Act, which Meeadh was initially charged under.

Criminal Court’s judgment read that the evidence submitted by the prosecution shows that Miaadh’s DNA was found on a glove that was discarded near the location that arson took place. The prosecution also presented evidence that Miaadh had suffered burn injuries on his right arm.

It further read that Miaadh showed no remorse over the arson, and his part in it.

Arabiyya students to be transferred to 2 other schools