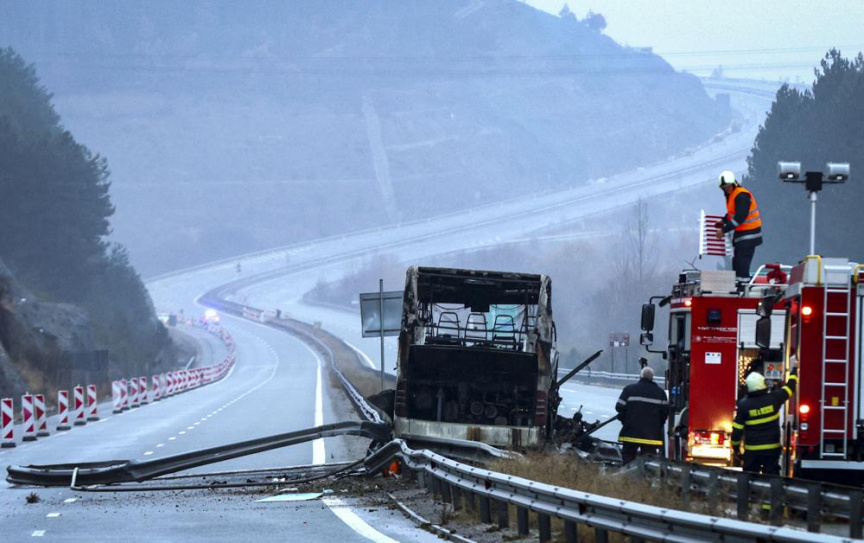 Firefighters and forensic workers inspect the scene of a bus crash which, according to authorities, killed at least 45 people on a highway near the village of Bosnek, western Bulgaria, Tuesday, Nov. 23, 2021. (Minko Chernev/BTA Agency Bulgaria via AP)

SOFIA, Bulgaria (AP) — A bus carrying tourists back to North Macedonia crashed and caught fire in western Bulgaria early Tuesday, killing at least 45 people, including a dozen children, authorities said. DNA tests were being carried out to identify the victims.

The bus apparently ripped through a guardrail on a highway, though authorities said the cause was still under investigation. Photos taken shortly after the crash showed the vehicle engulfed in flames as plumes of thick, black smoke rose. Daylight revealed a burned-out shell with all of its windows blown out, sitting in the median. A portion of the guardrail was lying in the road.

Seven survivors were hospitalized after the crash, which took place as a group of buses was returning from a trip to Turkey. Twelve children were among the dead, according to the North Macedonia chief prosecutor, Ljubomir Joveski.

Bulgarian Interior Minister Boyko Rashkov told reporters at the crash site that he had “never in my life seen something more horrifying” and that the identification process would take time.

“The people who were on the bus are turned to charcoal,” Rashkov said. “There were four buses that traveled together, and it is possible that passengers changed buses during the stops.”

Borislav Sarafov, chief of Bulgaria’s national investigation service, confirmed that 52 people were on the bus that crashed.

Blagoj Bocvarski, North Macedonia’s transport minister, told reporters in the capital of Skopje late Tuesday that officials have started a procedure to revoke the transportation license of the travel company that owns the bus. He said the company has four buses licensed to carry passengers internationally, but for the bus involved in the accident “there was no record in the ministry that it possessed the license.”

News of the crash hit hard in the small Balkan country of 2 million people. The North Macedonia government observed a minute of silence Tuesday and declared three days of mourning. Flags will be lowered to half-staff, and all public events will be canceled. The country’s prime minister traveled to Bulgaria, as did its chief prosecutor, who visited the crash site.

Azem Sadiki, mayor of Studenicani municipality near Skopje told reporters that 20 of the crash victims were local residents. He said the dead included a mother and her four children as well as the woman’s sister and her two children.

“We are very sad. This is a huge loss for us all, and the whole country,” Sadiki said.

Outside the government building in Skopje, Foreign Minister Bujar Osmani told The Associated Press that authorities are “trying their best to identify the victims as soon as possible.”

Osmani added: “Two things are important for us now, first the identification to finish as soon as possible, and second, to find the cause of the accident.”

The country’s prime minister, Zoran Zaev, who visited survivors in the hospital, told Bulgarian television channel bTV that one said he was awoken by an explosion.

In Skopje earlier, relatives gathered outside the travel company believed to have organized the trip but the office appeared closed.

“Now we are waiting for bad news,” a distraught Bekim Aliti told reporters outside the building. He said his wife and his brother’s wife were on the trip.

Eldin Shiroki said his cousin was a tour guide for the company. “We still don’t have any accurate information — so we are waiting,” he said.

In 2019, Bulgaria had the second-highest road fatality rate in the 27-nation European Union, with 89 people killed per million, according to European Commission data.

“Let’s hope we learn lessons from this tragic incident, and we can prevent such incidents in the future,” said Bulgarian caretaker Prime Minister Stefan Yanev.

European Commission President Ursula von der Leyen expressed her condolences to the families and friends of those who died and said “in these terrible times, Europe stands in solidarity with you.”

In response to the deadly crash, the Bulgarian government declared Wednesday a national day of mourning for the bus victims. The occasion will also mark the deaths of nine people who died in a nursing home fire Monday in the eastern Bulgarian village of Royak.