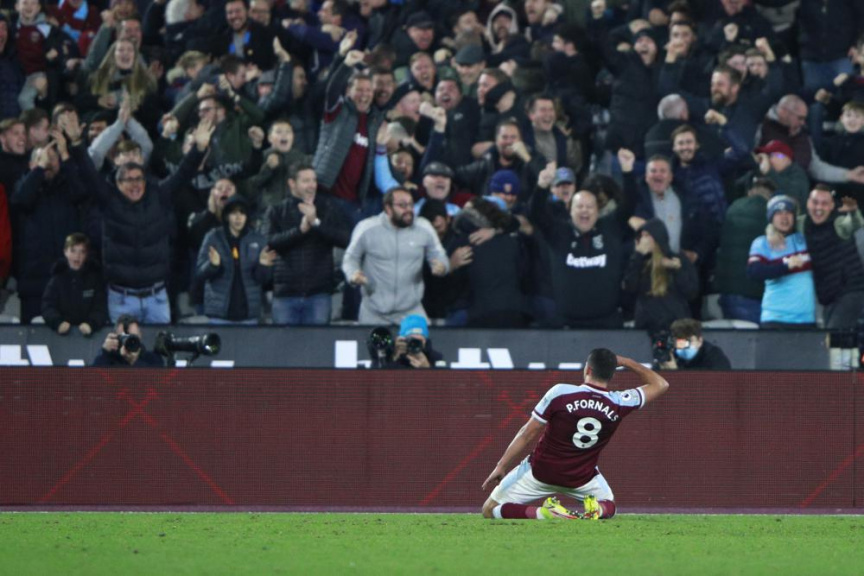 LONDON (AP) — The sound of West Ham fans singing “I’m forever blowing bubbles” could still be heard around the bars of the London Stadium an hour after beating Liverpool.

Liverpool hadn’t only been prevented from going a club-record 26th match unbeaten. Jürgen Klopp’s side was also dislodged from third place in the Premier League by West Ham with a 3-2 victory on Sunday.

There hasn’t been much to celebrate at West Ham, especially in the five years since moving into the stadium at the centerpiece of the 2012 Olympics.

It’s still an imperfect venue — reconfigured around a running track — but the fan dissent and disorder is fading into the past as David Moyes has the club dreaming of unprecedented highs and its fans happily singing the club anthem.

“This season reminds me of the Boleyn Ground,” West Ham forward Michail Antonio said of the old stadium. The atmosphere inside, everything to do with West Ham right now is unbelievable.”

West Ham, whose highest top-tier league finish was third in 1986, is looking like title contenders two years after Moyes took charge of a team a point above the relegation zone. Building on a sixth-place finish last season — missing out on the Champions League spots by two points — West Ham has now opened a top-flight season by winning seven of 11 games for only the second time.

There was a helping hand from Alisson Becker.

The Liverpool goalkeeper flapped in the air to allow Pablo Fornals’ inswinging corner to go through his hands in the fourth minute. After Trent Alexander-Arnold equalized at the end of the first half, Jarrod Bowen ran at the Liverpool defense before slipping the ball to Fornals whose shot was helped into the net by Alisson’s weak touch. Another assist came from Bowen in the 74th when a corner was headed in by Kurt Zouma through Alisson’s raised hands.

Although Divock Origi pulled one back, scoring on the turn, Liverpool couldn’t find another goal to avoid a first loss in any competition since being knocked out of the Champions League last season by Real Madrid in April. It’s even further back — into February — since the 2020 champions lost in the Premier League.

There’s now only a three-point gap between West Ham and leader Chelsea, while defending champion Manchester City is only ahead in second on goal difference heading into the two-week international break.

Moyes is providing a reminder of the managerial credentials that earned him the job as Alex Ferguson’s successor at Manchester United where he lasted less than a year before being fired in 2014.

Now West Ham is six points higher than United, which is struggling under Ole Gunnar Solskjaer.

“I want us to challenge the teams in the top four, whoever that may be,” Moyes said. “I want us to be competitive. I hope before now people were thinking West Ham’s a tough game. Today’s opposition have very little weaknesses. I want to give the players the credit they deserve.”

Arsenal moved up to fifth after Emile Smith Rowe clinched a 1-0 victory over Watford to go 10 matches unbeaten in all competitions after opening the Premier League with three losses. Watford finished with 10 men after Juraj Kucka was shown a second yellow card for catching Nuno Tavares in the 89th as Claudio Ranieri’s side remained two points and a place above the relegation zone.

Antonio Conte saw Tottenham fail to register a single shot on target on another lackluster day for Harry Kane in a 0-0 draw with Everton.

It’s now 3 hours, 47 minutes in the league — stretching into Nuno Espirito Santo’s ill-fated reign — since the north London club hit the target. It was too late for Tottenham to take advantage of the man advantage when Mason Holgate was sent off in the 90th for a foul on a dangerous foul on Pierre-Emile Hojbjerg.

Everton is in 11th place and Tottenham is two places better off.

A curling finish from Harvey Barnes secured a 1-1 draw for Leicester at Leeds, canceling out Raphinha’s free kick. Midtable Leicester has 15 points, four more than Leeds.