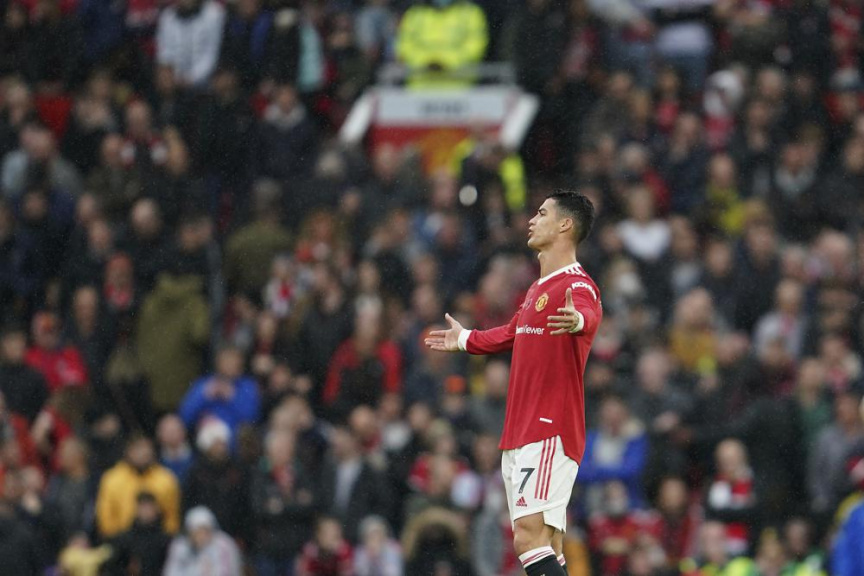 MANCHESTER, England (AP) — After more than 30 months, a Manchester derby has been won by City in the Premier League again.

Not that it’s proved too painful for Pep Guardiola struggling to beat Manchester United. After all, he’s collected the Premier League trophy twice in that time and Ole Gunnar Solskjaer has won nothing with United.

City’s 2-0 victory over United on Saturday leaves Solskjaer’s position as United manager look even more precarious on the face of it — especially following a 5-0 humiliation to Liverpool in the previous game at Old Trafford two weeks ago.

But United has provided no indication that it is willing to discard Solskjaer after three years.

Perhaps it’s down to the crowd having yet to turn on Solskjaer, despite another game when United looked bereft of ideas and was completely outplayed by an archrival which had lost to Crystal Palace last weekend.

The misery began after seven minutes when Eric Bailly accidentally diverted João Cancelo’s cross into his own yet. Goalkeeper David de Gea, whose saves had limited the damage, was caught out at the near post in first-half stoppage time by Bernardo Silva squeezing a shot in from another of Cancelo’s deliveries from the left flank.

United was booed off at halftime but there was never any obvious dissent toward Solskjaer from fans who remember him fondly for scoring the goal that clinched the 1999 Champions League title.

The crowd was remarkably patient despite seeing only a single shot on goal from United when a first-time volley from Cristiano Ronaldo was pushed wide by Ederson in the 26th minute.

“The best way to silence Old Trafford is to have the ball with a lot of passes and attack the box in the right moments and we did that,” Guardiola, City’s manager, said after their first league win over United since April 2019. “We played a really good game.”

United, which had beaten Tottenham last Saturday, heads into the two-week international break still in fifth place but nine points behind Chelsea, which was surprisingly held 1-1 at home by Burnley. City in second place surged six points in front of United.

“It’s very disappointing and it feels like after last week we made a step or two forward,” Solskjaer said. “Results-wise it’s a big step backwards. But it’s probably for me a way of losing that we don’t like. When you lose a game against a good team, you want to see a better Man United team than that.”

Norwich fired Daniel Farke as manager despite finally winning their first game of the season in the league’s 11th round. Mathias Normann’s solo effort and Teemu Pukki’s penalty clinched a 2-1 win at Brentford in a meeting of promoted clubs.

But while Brentford is in 14th place, Norwich is seven points behind in the 20th and last place. Farke leaves after more than four years in charge that have seen him twice lead the eastern English club into the Premier League.

Only a superior goal difference is keeping Newcastle off the bottom of the standings after drawing 1-1 at Brighton.

After being rejected by Unai Emery, Newcastle’s Saudi ownership looks finally ready to appoint a manager to replace the fired Steve Bruce. Eddie Howe, who has been out of management since leaving Bournemouth last year, was at Brighton alongside Newcastle director Amanda Staveley.

Leandro Trossard’s penalty for sixth-placed Brighton was canceled out by Isaac Hayden’s volley in the 65th.

At Stamford Bridge, Chelsea paid the price for sloppiness as Matej Vydra made the most of Burnley’s only scoring chance in the 79th to cancel out Kai Havertz’s first-half header.

“Of course they were lucky, and that’s why everybody loves the game, because it’s possible to win matches like this,” Chelsea manager Thomas Tuchel said. “I stick with my feeling from the sideline, I have proved from all data right now that we played a fantastic match with a great attitude and intensity.

“I’m very happy with where we are, and it can happen as it did today that somebody else steals a point and is lucky.”

Liverpool can trim Chelsea’s lead to one point by beating West Ham on Sunday.

Patrick Vieira’s transformation of Crystal Palace is making an impact. Wilfried Zaha and Conor Gallagher scored in a 2-0 victory over Wolverhampton on Saturday to follow up on a triumph last weekend at Manchester City. It’s now six games unbeaten for the south London club.

“We know the team has potential and the potential is starting to be seen,” Vieira said, “but we still need to keep that work ethic and momentum going.”