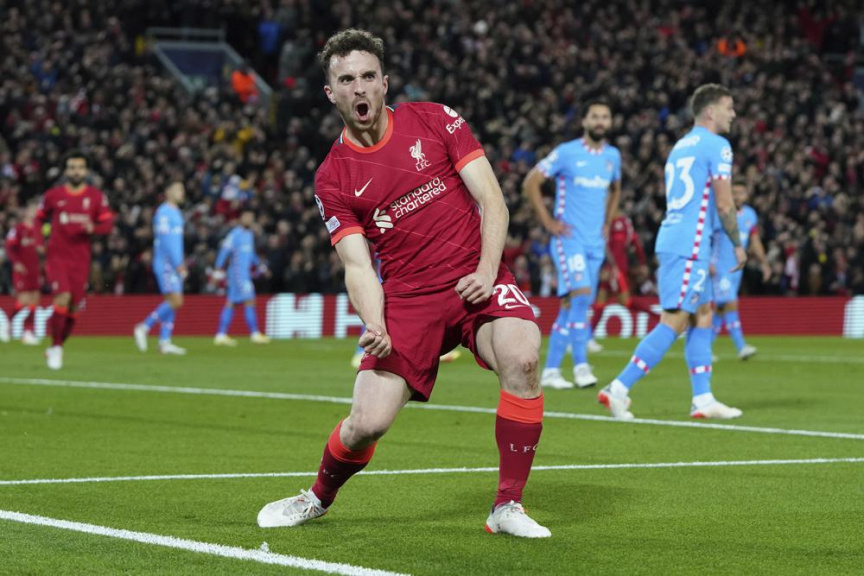 GENEVA (AP) — Liverpool and Ajax extended their perfect winning records in the Champions League on Wednesday to advance into the round of 16 — which is starting to take a 1970s throwback look.

Liverpool cruised past Atlético Madrid 2-0 at Anfield and Ajax hit 10-man Borussia Dortmund with late goals in a 3-1 come-from-behind win in Germany.

The four teams with four straight wins — after Bayern Munich and Juventus sealed their places Tuesday — have already given the knockout lineup a nostalgic feel. Ajax, Bayern and Liverpool combined to win all eight European Cup titles from 1971-78.

Liverpool had never opened a Champions League group stage with four wins, though it was rarely troubled against Atlético in Group B after Diogo Jota and Sadio Mané scored in the first 21 minutes. Atlético dropped to third in the group behind Porto, which was held to a 1-1 draw at last-place AC Milan.

Ajax is having a standout Champions League campaign after being ignored by the Super League founders from England, Italy and Spain when they lined up their ill-fated project several months ago.

The Dutch champion made it back-to-back big wins over Dortmund, which had veteran defender Mats Hummels sent off in the first half.

Second-place Dortmund trails Ajax by six points in Group C with two rounds left. Dortmund is level on points with Sporting Lisbon, which routed Beşiktaş 4-0 and hosts the German side next on Nov. 24.

Karim Benzema’s goals ensured Madrid beat Shakhtar Donetsk 2-1 and lead the standings by two points from Inter. The Italian champion made it two straight wins over Sheriff, 3-1 away to the champion of Moldova.

Manchester City overpowered Club Brugge 4-1 and was rewarded with top spot in Group A after late drama at Leipzig where Paris Saint-Germain drew 2-2.

A PSG team missing the injured Lionel Messi rallied from an early Leipzig surge to lead at halftime through two goals by Georgino Wijnaldum. But PSG dropped points after a stoppage-time penalty by Leipzig substitute Dominik Szoboszlai.

City took a one-point lead over PSG before they meet in Manchester in three weeks’ time.

Liverpool right-back Trent Alexander-Arnold typically creates as many scoring chances in a season as a playmaker wearing No. 10.

His precision passes into the heart of the goalmouth carved open Atlético Madrid’s defense to set up Jota and Mané for simply taken goals.

They ensured Liverpool will be seeded as a group winner in the round of 16 draw on Dec. 13. The 2019 champion is seven points clear of second-place Porto.

A 1-1 draw with Porto at San Siro ended with 40-year-old Milan substitute Zlatan Ibrahimović being marked by 38-year-old Pepe. Ibrahimović had a goal disallowed in the closing minutes because a teammate was offside.

Ajax sold its core of young Dutch talent after its stellar Champions League run in 2019, when it was minutes away from reaching the final against Liverpool.

Serbian playmaker Dusan Tadic stayed and he scored Wednesday in the 72nd minute to spark Ajax’s three-goal comeback at Dortmund.

Sébastien Haller scored for the fourth straight game and the former West Ham forward now has seven goals in the group stage.

Dortmund had led when Marco Reus scored a first-half penalty minutes after Hummels was sent off. It seemed a harsh decision for a sliding tackle on Brazilian forward Antony that did not appear dangerous.

Paris Saint-Germain already trailed to an early goal by its former player Christopher Nkunku, his fifth for Leipzig in the group stage, when the German side got a penalty in the 12th minute.

That spot-kick from Andre Silva was saved by Gianluigi Donnarumma, and PSG turned the game around with Wijnaldum’s first goals for the club.

When a second spot-kick was awarded in the closing minutes, Neymar tried to sway the outcome.

Szoboszlai didn’t and there is now an extra edge to PSG’s upcoming visit to Man City with Club Brugge still in contention just four points off second place.

“Being second to City doesn’t change anything for us,” said PSG coach Mauricio Pochettino of renewing his rivalry with Pep Guardiola. “We need to have the desire to go there and win the game to try to be top of the group.”

United, Chelsea advance in CL; Barcelona made to wait