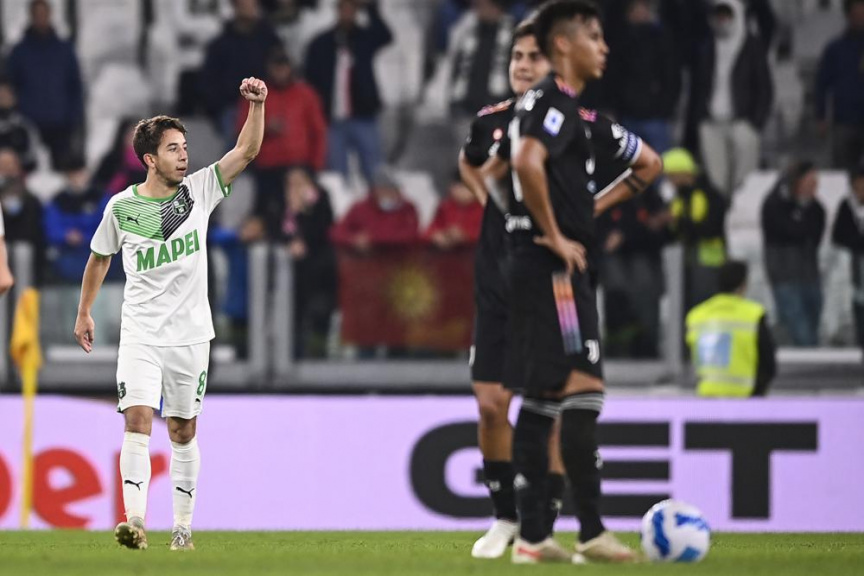 Sassuolo's Maxime Lopez, right, celebrates after scoring his side's second goal of the game during the Italian Serie A soccer match between Juventus and Sassuolo at the Allianz Stadium in Turin, Italy, Wednesday, Oct. 27, 2021. (Fabio Ferrari /LaPresse via AP)

MILAN (AP) — Massimilano Allegri’s 200th match in charge of Juventus ended in defeat as Sassuolo scored late to snatch a 2-1 victory in Turin in Serie A on Wednesday.

Juventus is 13 points behind Serie A leader AC Milan after 10 matches. Third-place Inter Milan closed the gap to its city rival to seven points with a 2-0 win at 10-man Empoli.

Sassuolo moved up to ninth, just a point behind Juventus.

One of Juve’s main problems this season has been finding goals, especially after the transfer of Cristiano Ronaldo to Manchester United. Only one team in the top 12 in Serie A has scored fewer goals than Juventus with 14.

“We certainly need to be scoring more goals because one per game is not enough,” Allegri said. “We need to get the balance right between attacking and defending at all times.

“We must think long and hard about this defeat because we can never afford to drop our guard,” he continued. “We clearly have to do much better than what we’re doing at the moment. Mentally we must be much stronger as a team.”

After a rocky start to Allegri’s second spell in charge, Juventus had appeared to be back on track.

However, Domenico Berardi almost gave the Sassuolo the lead after McKennie had lost the ball, but his curled effort was finger-tipped round the post by Juventus goalkeeper Mattia Perin.

Paulo Dybala went even closer to the opener in the 37th, but his effort came off the right post and it was Sassuolo which took the lead a minute from halftime when Frattesi fired Grégoire Defrel’s through ball into the bottom left corner.

Juventus appeared more determined after the break and Sassuolo defender Kaan Ayhan had to clear Juan Cuadrado’s shot off the line with his knee with goalkeeper Andrea Consigli beaten. Moments later, Consigli parried Dybala’s shot and the ball came to Federico Chiesa, who headed over.

The Bianconeri did get the equalizer when McKennie headed a Dybala free kick into the top right corner.

Juventus pushed hard for the winner and all the Bianconeri players were at the other end, leaving them wide open at the back when Lopez sprinted onto a long ball and managed to evade McKennie’s last-ditch tackle and win the match with a chipped effort over Perin.

Goals from Danilo D’Ambrosio and Federico Dimarco saw Inter keep up the pressure on the top two: AC Milan and Napoli.

Inter took the lead in the 34th when D’Ambrosio headed in a delightful chipped pass from Alexis Sánchez and the match swayed further in the Serie A champion’s favor seven minutes into the second half when Empoli midfielder Samuele Ricci was shown a straight red card for a horrendous tackle on Nicolò Barella.

Dimarco doubled Inter’s lead in the 66th when he fired in a pinpoint cross to the back post from Lautaro Martínez.

Inter also had three goals ruled out — two for offside and another for handball — while a Roberto Gagliardini header came off the post.

Roma, Atalanta and Lazio all won to keep in sight of the top spots.

Roma remained fourth, two points behind Inter, after it came from behind to win 2-1 at relegation-threatened Cagliari.

Atalanta is a point further back and also had to recover from conceding first in a 3-1 victory at Sampdoria.

Lazio beat Fiorentina 1-0 to move above its opponent and Juventus into the sixth spot.

Inter goes top of Serie A with 4-0 win