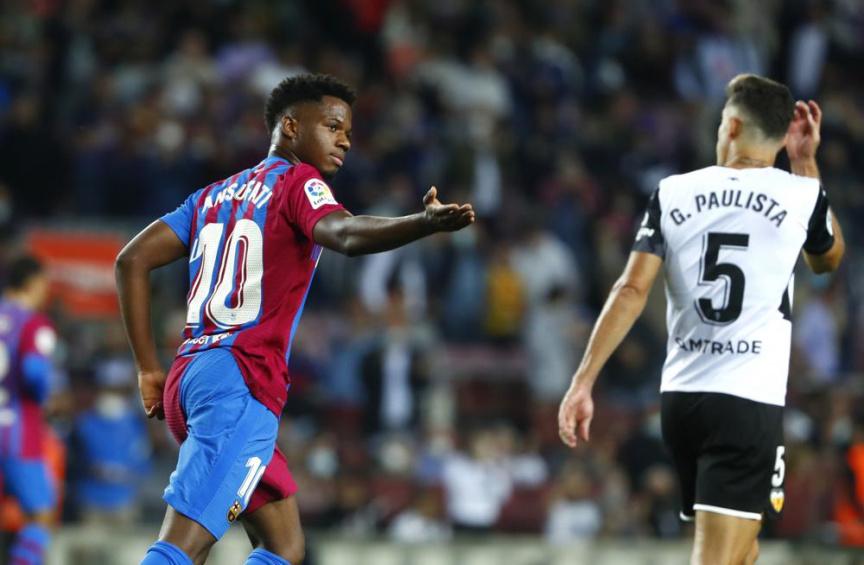 The 18-year-old Fati made his first start for Barcelona after a long injury layoff on Sunday, scoring a goal and earning his team a penalty as the Catalan club halted its losing streak by rallying to beat Valencia 3-1 in the Spanish league.

Memphis Depay and Philippe Coutinho also scored for Barcelona as it moved to seventh place, five points behind leader Real Sociedad and with a game in hand.

Fati returned to action last month after being sidelined for more than 10 months because of a knee injury, coming off the bench in three straight matches before getting his first start on Sunday and giving fans more hope that the club can rebuild around him after Messi’s departure to Paris Saint-Germain. He had already scored a few minutes after entering the game against Levante.

“We’ve always said we need players like him,” said Barcelona coach Ronald Koeman, who was back on the bench after a suspension of two league matches following a red card for complaining. “It was his first start and it was already decided with the doctors that he would only play for about an hour. We don’t want to overwork him in such an important week for us.”

Barcelona was coming off two defeats before the international break — 2-0 at Atlético Madrid in the league and 3-0 at Benfica in the Champions League. It had won only once in its last six matches in all competitions.

Barcelona has begun a three-game home stint that Koeman called key to getting the team back on track. It will next play a critical Champions League game against Dynamo Kyiv on Wednesday and then the first “clásico” of the season against Real Madrid.

“It was a very important win, we are in a key week in the season,” Barcelona midfielder Frenkie de Jong said. “We started it well by earning points and gaining confidence, that’s very important for the club right now.”

The loss extended Valencia’s winless streak to five matches. It dropped to ninth place in the league.

José Luis Gayà opened the scoring for the visitors with a powerful long-range shot five minutes into the match at the Camp Nou Stadium, but Fati equalized from outside the area in the 13th and won the penalty kick converted by Depay in the 41st.

Valencia complained about the penalty call, saying Gayà touched the ball before Fati fell inside the area.

Coutinho, marred by injuries since returning to Barcelona, sealed the victory from close range in the 85th for his first goal with the Catalan club in nearly a year. American defender Sergiño Dest made the pass for the Brazilian.

Dest came off in the final minutes to allow the debut of Sergio Aguero, who was signed by Barcelona from Manchester City for this season but was yet to play as he had been recovering from injury.

Barcelona is two points behind Madrid, Sevilla, Osasuna and defending champion Atlético Madrid. Madrid and Atlético had their weekend games postponed because some players were on international duty with their national teams.

Barcelona’s delegate members earlier Sunday approved the club’s financial accounts for the 2020-21 season with losses of 481 million euros ($557 million). They also gave their approval to a budget of an operating income of 765 million euros ($886 million) for 2021-22.

“We have to look forward and focus on getting the club back to its old self,” club president Joan Laporta said. “We have been working tirelessly for six months to get the club out of the institutional pit that it has fallen into. But we are not going to be able to fix this situation overnight.”

Third-place Sevilla rebounded from its first loss of the season with a 1-0 victory at Celta Vigo, with Rafa Mir scoring the winner early in the second half. It was the fourth loss in five home games for 16th-place Celta.

Osasuna won 2-1 at Villarreal with Ezequiel “Chimy” Ávila scoring the winner for the visitors in the 87th. Lucas Torró had opened the scoring for Osasuna in the first half and Gerard Moreno equalized early in the second half. It was the third straight victory for fifth-place Osasuna. Villarreal stayed 11th.