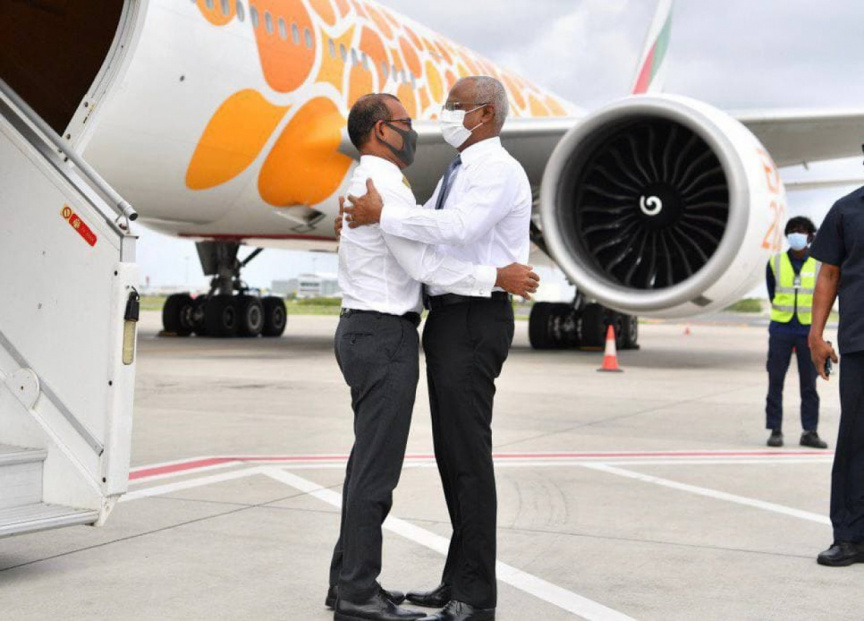 Parliament Speaker, former President Mohamed Nasheed, who was traveled overseas to treat injuries he sustained in an assassination attempt in May, has just returned to Maldives – after four months abroad.

Nasheed had arrived from UAE – which he had recently traveled to in order to attend the Dubai Expo. He arrived via a flight from Emirates Airline which landed at Velana International Airport at 02:50 this afternoon.

Even though Nasheed was received at the airport by President Solih who had been close friends for over a long period of time – Nasheed had announced earlier that he could no longer stand in political alignment with President Solih, citing differences in political ideology. However, Nasheed had stressed that they would always stand together when it comes to personal matters.

When Nasheed was sentenced to jail during former President Yameen Abdul Gayyoom’s administration – he had traveled to the UK for medical treatment after which he sought and was granted political asylum in the country. Nasheed had lived in the UK – until Yameen’s term ended by the election of current President Solih. When Nasheed had returned to the Maldives back then, the first person to welcome him was also President Solih – in the capacity of the president-elect.

Nasheed had requested the Parliament for an extension to his leave in August, stating he was hesitant to return to Maldives until the people who conspired to assassinate him were arrested and brought to justice. He has yet to make an official comment on what made him change his mind and return to Maldives.

The assassination attempt on Nasheed involved a homemade remote-controlled IED which was strapped to motorcycle parked nearby Nasheed’s residence in Male’ City, and was detonated at 08:27 pm on May 6, just as Nasheed, 54, exited his residence and went to get in his car. Nasheed was thrown to the ground and sustained multiple shrapnel wounds.

He was rushed to ADK Hospital, where he underwent multiple life-saving surgeries to remove ball bearings and other shrapnel, some of which perforated his internal organs.

He was airlifted to a military hospital in Germany on May 13, and traveled to the United Kingdom on July 21 – where he remained before traveling to UAE to take part in Dubai Expo.

'Only 4 bills submitted, unlikely any more will be'

Nasheed: Airport given to GMR to double economic growth

Speaker Nasheed: I’m not back for just three days

Speaker Nasheed back in Parliament after four months