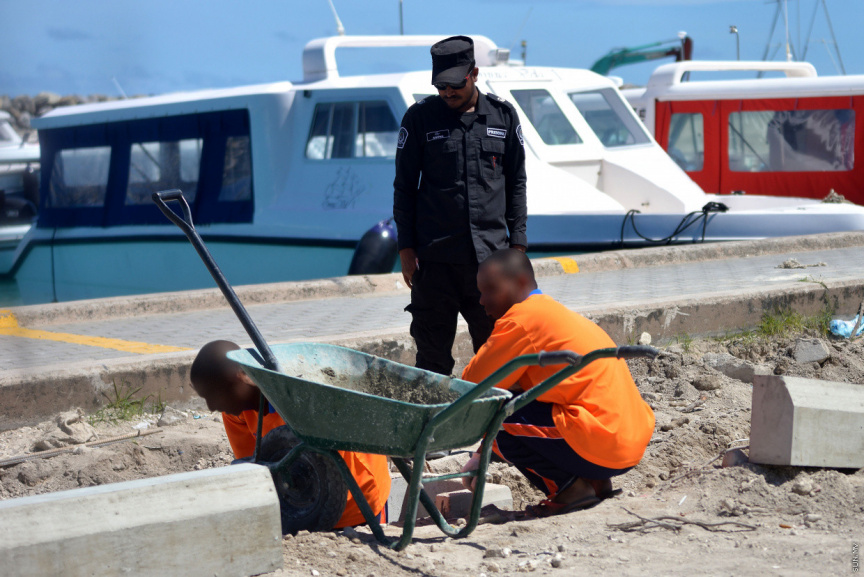 A Correctional Officer observes detainees as they work as part of their community service. (Sun Photo/Afrah)

In a hallmark decision, the Criminal Court has sentenced a person who pled guilty for participating in a theft to community service – alongside a shorter jail sentence.

The judgment was issued last Sunday – the judge preceding the case was Judge Adam Mohamed.

Khalid Saifulla Shaagar, a Bangladeshi national, who was found guilty of participation in a theft during trial, was sentenced to jail for one month and 137 hours of community service.

Khalid pled guilty to being a look-out when another individual entered Litus Service Center in Male’ City with the intention to steal. The stolen goods were later found in Khalid’s room – which he shares with a group of people – as stated in the judgment.

It was further noted that during the trial – Khalid had explained why he had taken part in the theft. On this note, he said it was as his salary was suspended due to the COVID-19 pandemic – leading to severe financial difficulties, to the point of being unable to provide food for himself.  The judgment also said that based on the statement he had made at the Court – he was remorseful for his actions.

Moreover, Khalid had stated before the Court during his trial that he had pled guilty to the charges raised against him in his own free will – without any undue influence. He also stated that he wished not to appoint an attorney to represent him.

For the crime he committed – the Judge had the discretion to sentence him to jail for a period of four months and 24 days as per the Penal Code. However, as he had pled guilty, the sentence was shortened to one month and 24 days.

The concerns raised by the State Prosecutor was addressed in the judgment – where it was stated that the failure to formulate regulations within the allocated time by Corrections should not hinder the rights guaranteed to Khalid by the law.

The judgment also noted that Khalid pleading guilty for the crime had saved the Court’s as well as the State’s time and resources.

With reference to all those reasons – the Judge had made the decision to sentence him to one month and 24 days in jail and 137 hours of community services.

Noting Corrections’ failure to formulate the regulations regarding community service – the Judge said that it should be some sort of work which the Corrections can closely monitor at the moment.

Remand of 2 who robbed and blackmailed victim extended

Man jailed released due to negligence in healthcare

Man who urinated inside mosques jailed for 1M, 19 days