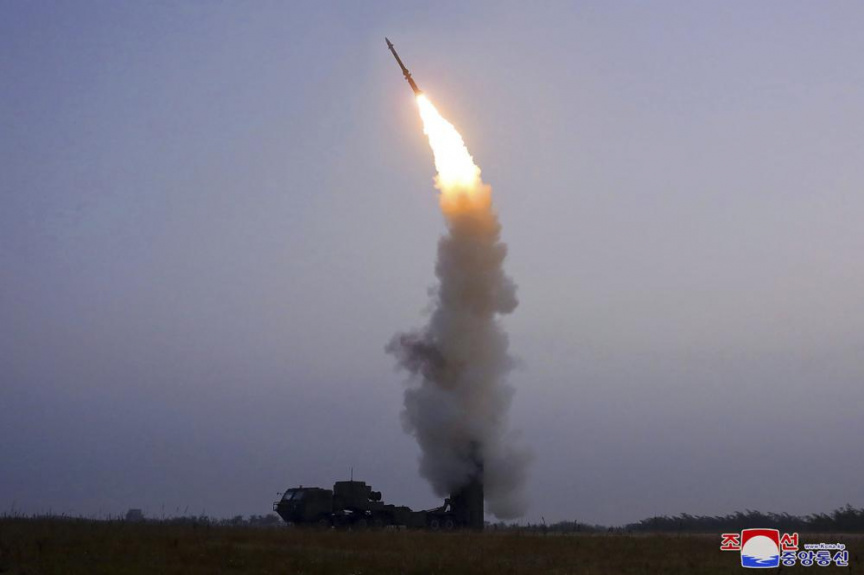 This photo provided on Oct. 1, 2021, by the North Korean government shows what North Korea claims to be the test firing of a newly developed anti-aircraft missile in North Korea, Thursday, Sept. 30, 2021. (Korean Central News Agency/Korea News Service via AP)

SEOUL, South Korea (AP) — North Korea said Friday it had test-fired a newly developed anti-aircraft missile in the fourth round of weapons firings in recent weeks, even as it pushes to reopen dormant communication channels with South Korea in a small reconciliation step.

In September, North Korea resumed its first missile tests in six months but still offered conditional talks with Seoul in what some experts say is an attempt to extract concessions in its nuclear diplomacy with the U.S. Earlier this week, North Korea leader Kim Jong Un expressed his willingness to restore communication hotlines with South Korea in coming days to promote peace on the Korean Peninsula.

It said the test was aimed at confirming the practicality of operation of the launcher, radar and battle command vehicle as well as the combat performance of the missile.

South Korea, Japan and the United States typically publicly confirm North Korean missile launches soon after they occur, but did not do so for Thursday’s test, indicating it may not have been a major weapons test.

While Kim said he intended to reopen inter-Korean hotlines during his speech at parliament, he also shrugged off U.S. offers for dialogue as a “cunning” concealment of its hostility against the North. He also reiterated the North’s demands that South Korea abandon a “double-dealing attitude” over the North’s missile tests if Seoul wants to see the resumption of talks and major cooperation steps.

South Korea has said it would prepare for the restoration of the hotlines, which it called necessary to discuss and resolve many pending issues. The cross-border phone and fax lines have been largely dormant for more than a year.

Some experts say North Korea wants South Korea to persuade the United States to ease punishing economic international sanctions on it. Other say North Korea is pressuring South Korea not to criticize its ballistic missile tests, which are banned by U.N. Security Council resolutions, as part of its quest to be recognized internationally as a nuclear power.

North Korea also recently has test-fired a new hypersonic missile, a newly developed cruise missile and a ballistic missile launched from a train. South Korea’s military assessed the hypersonic missile to be at an early stage of development, but experts say the two previous missile tests displayed the North’s ability to attack targets in South Korea and Japan, both key U.S. allies that host U.S. troops.

The North’s recent tests were in line with Kim Jong Un’s earlier vows to introduce sophisticated weapons and enlarge his nuclear arsenal to defend itself against U.S. hostility — a reference to U.S.-led sanctions on the North and regular military drills between Washington and Seoul that North Korea believes are an invasion rehearsal.

Nuclear diplomacy between Pyongyang and Washington has been largely deadlocked since early 2019.

North Korea hasn’t tested a long-range missile capable of reaching the U.S. mainland for about four years, an indication it wants to keep alive its chances for diplomacy.

NKorea slams US for supporting Taiwan in nod to China

Taliban order fighters out of Afghan homes taken over