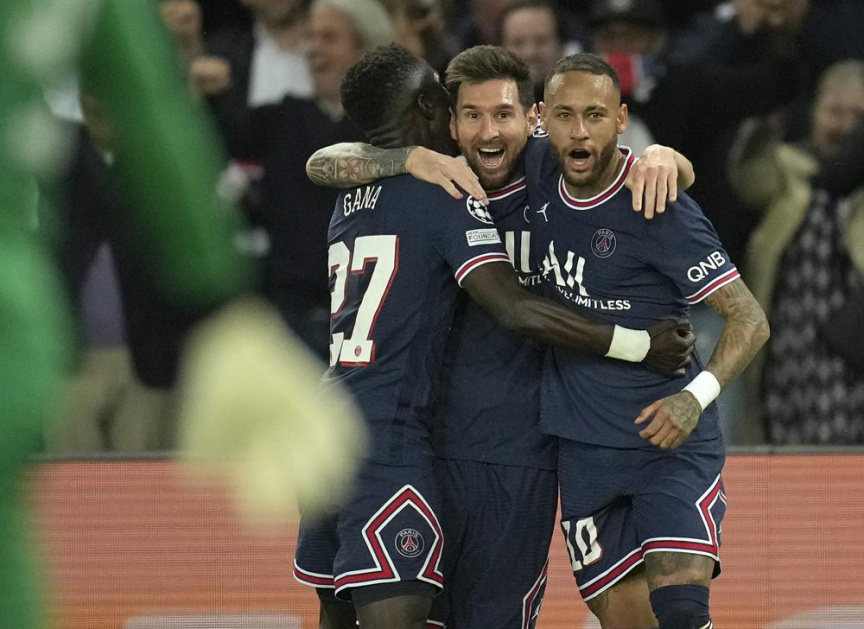 Messi’s brilliant strike capped a 2-0 win for PSG over fellow big spender Manchester City in what was a repeat of last season’s semifinal.

But the surprise of the second round was Moldovan club Sheriff’s coup in Madrid, where the home team was repeatedly thwarted by Greek goalkeeper Giorgos Athanasiadis and missed a host of chances before Thill’s last-minute goal secured a 2-1 win for the visitors.

Club Brügge and Liverpool also claimed away wins at Leipzig and Porto, respectively.

With all the attention on PSG’s star attacking trio of Messi, Neymar and Kylian Mbappé, it was unheralded midfielder Idrissa Gueye who opened the scoring in Paris with a hard strike inside the top right corner in the eighth minute.

But the home team was fortunate to be leading at the break with Raheem Sterling and Bernardo Silva both hitting the crossbar in quick succession, the latter from just a couple of yards out with an empty net.

Gianluigi Donnarumma also made his case for becoming PSG’s No. 1 goalkeeper with a commanding performance to keep City out.

Messi settled the issue in the 74th after playing a one-two with Mbappé, who returned the ball with his heel, and then dinking it over Ederson inside the far corner.

It was the Argentine star’s first goal since his summer switch from Barcelona.

City had been unbeaten in its previous 18 Champions League group-stage matches.

In the other Group A game, Club Brugge won 2-1 at Leipzig.

Christopher Nkunku’s fifth-minute goal for Leipzig was ruled out for offside, but a VAR check gave the go-ahead for the home team’s celebrations to resume a minute later.

But Hans Vanaken equalized in the 22nd – again after a long VAR check – and Mats Rits grabbed what proved to be winner in the 41st.

Real Madrid was happy to be back playing in the Santiago Bernabéu stadium, but the visitors appeared to feel right at home there, too.

Uzbek forward Jasurbek Yakhshiboev stunned the home fans by scoring with a header to Brazilian defender Cristiano’s cross in the 25th minute.

Madrid pushed and pushed for an equalizer before Karim Benzema finally scored with an expertly taken penalty in the 64th. It ensured the France forward became the first player to score in 17 successive Champions League seasons. Messi became the second later on.

Madrid is second with three, ahead of Shakhtar Donetsk and Inter Milan who have one each after drawing 0-0 in the early game.

Rafael Leão scored for Milan in the 20th after some fine work from Brahim Díaz to set him up, but the home team was dealt a severe blow nine minutes later when Franck Kessié was shown a second yellow card for catching Marcos Llorente.

Still, the visitors had to wait until the 84th for Antoine Griezmann to equalize with his first goal for Atlético since he returned from Barcelona. Suárez, another former Barça forward, got the winner from the spot after a handball in the area. It was the Uruguay star’s first Champions League goal away from home since he scored for Barça at Roma in September 2015.

Nothing worked for Porto at home, either, as the Portuguese club lost 5-1 to Liverpool.

Mohamed Salah capitalized on a fortunate deflection from a Porto defender to open the scoring for Liverpool in the 18th and Sadio Mané had a tap-in after some lax defending before the break.

Porto’s experienced defender Pepe was injured in the warmup and Otávio went off early, too.

Salah grabbed his second on the hour-mark. Mehdi Taremi pulled one back, but Roberto Firmino scored two to pad the scoreline.

With Erling Haaland still out for Dortmund, it was up to Sébastien Haller to grab the headlines in Group C.

The Ivory Coast forward’s 43rd-minute goal gave Ajax a 2-0 win over Beşiktaş and took his tally to five goals in two Champions League games since his offseason switch from West Ham.

Dortmund failed to impress in Haaland’s continued absence with a muscle injury. The German team eked out a 1-0 win at home over Sporting Lisbon thanks to new signing Donyell Malen’s first goal for the club.

United, Chelsea advance in CL; Barcelona made to wait

Bale and Hazard out of Madrid match against Sheriff

United wins in chaos; Bayern, Juve, Chelsea do it easy