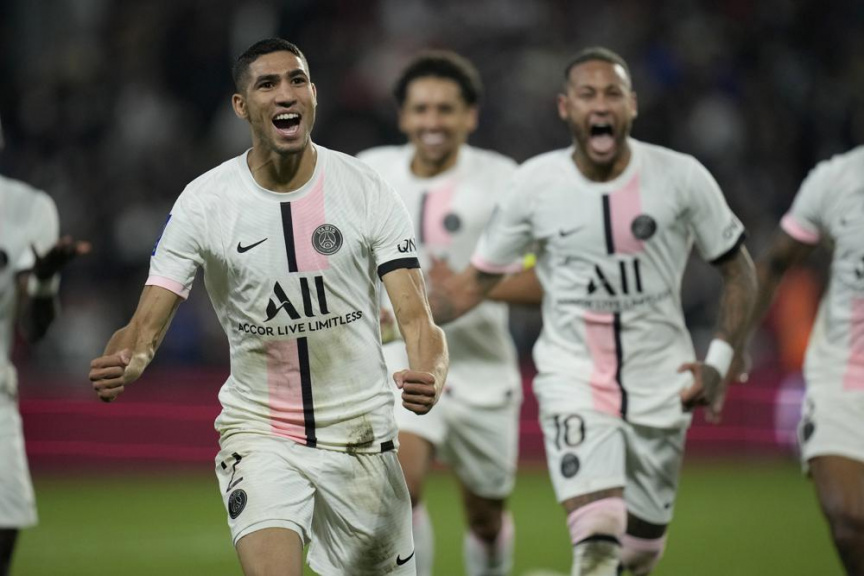 The referee was about to blow the final whistle when right back Achraf Hakimi netted his second goal in the fifth minute of injury time with a curling shot past goalkeeper Alexandre Oukidja.

Moments earlier, Metz captain Dylan Bronn and coach Frederic Antonetti were sent off — Bronn for a second yellow card after kicking the ball away and Antonetti for angrily protesting to the referee.

As PSG players celebrated Hakimi’s goal, a furious Oukidja sprinted over to them and starting shoving as he sought out striker Kylian Mbappe. It was unclear why, but it took several minutes for players — and PSG coach Mauricio Pochettino — to calm Oukidja down.

Images appeared to show Mbappe saying something to Oukidja when the goalkeeper was facedown on the ground after conceding Hakimi’s second goal.

Oukidja then sprang to his feet and chased down Mbappe, leading to PSG players responding protectively and Neymar pushing Oukidja over. Neymar and Oukidja both were shown a yellow card.

Lionel Messi sat out after taking a knock to the knee in Sunday’s last-gasp 2-1 home win over Lyon.

Striker Mauro Icardi, who headed a 93rd-minute winner against Lyon, latched on to a smart pass from Neymar in the fourth minute.

He expertly clipped the ball over the goalkeeper only for a defender to clear it off the line. But Hakimi finished neatly with a volley.

PSG missed chances and this allowed Metz to get into the game. Central defender Boubakar Kouyate equalized with a superb header from a corner in the 39th that goalkeeper Keylor Navas could not keep out.

Navas rescued PSG with a fine one-handed save moments before the break, when right winger Lamine Gueye broke through on goal and tried to chip him.

PSG is seven points ahead of second-place Marseille, which remains unbeaten after a 0-0 draw at third-place Angers.

Tensions were high at the final whistle as some Marseille fans left their enclosure and confronted Angers fans, before security officials intervened quickly.

There have been two high-profile incidents of fan disorder this season — in matches between Nice and Marseille, and between northern rivals Lens and Lille.

Fourth-place Lens lost its unbeaten home record as it slipped to a 1-0 defeat against Strasbourg.

Meanwhile, Lyon moved above Nice and into sixth place after a 3-1 win against lowly Troyes.

Lyon fell behind just before the break when midfielder Xavier Chavalerin volleyed in from the edge of the penalty area.

Xherdan Shaqiri curled in an equalizer minutes into the second half for his first goal since joining from Liverpool. Another former Premier League player made it 2-1 as former Chelsea left back Emerson pounced in the 71st.

Midfielder Lucas Paqueta, who scored last Sunday against PSG, wrapped it up late.

It was only Gourvennec’s second league win after replacing title-winning coach Christophe Galtier, who left in the offseason to join Nice.

Struggling Monaco won 3-1 at home against Saint-Etienne for just its second victory.

After German forward Kevin Volland put Monaco ahead in the 27th minute, Saint-Etienne goalkeeper Etienne Green was sent off moments later for a clumsy foul.

The visitors equalized through striker Denis Bouanga in the 41st. France striker Wissam Ben Yedder scored with a penalty for the second straight game to make it 2-1 in the 61st and then added a late goal.

New signing Valere Germain made it three goals in three games for Montpellier with a brace in a 3-3 home draw with Bordeaux.

South Korea forward Hwang Ui-jo was on target for Bordeaux with his third in two games.

Eighth-place Nantes made it seven goals in two matches by beating Brest 3-1.