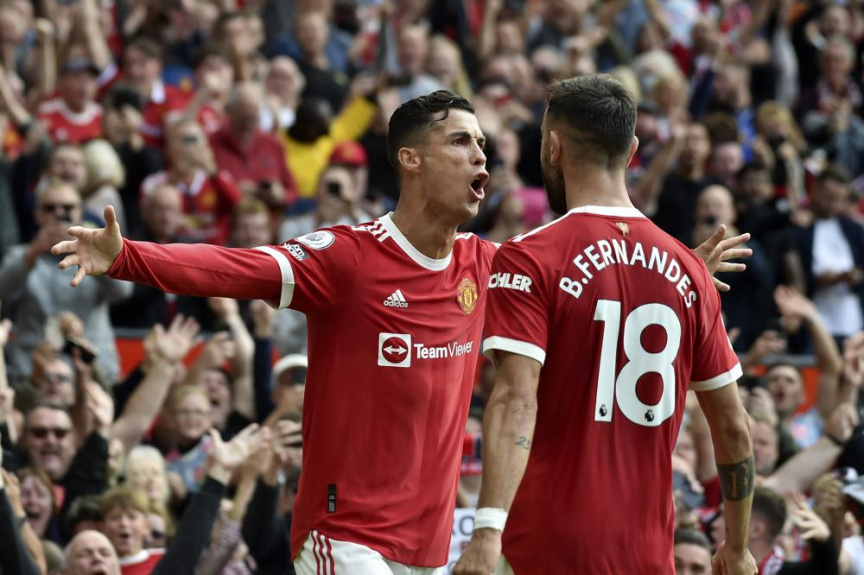 MANCHESTER, England (AP) — The Manchester United fans wanted to soak up every moment, savor every possible glimpse of Cristiano Ronaldo and try to roll back the years, to the time when the trophies were flowing.

“Viva Ronaldo,” they bellowed as Ronaldo re-emerged from the dressing room to conduct television interviews by the pitch due to coronavirus restrictions.

“It is unbelievable,” the 36-year-old Portugal forward said, looking around at the fans whose singing struggled to make him heard. “I did not expect that they would sing my name all game.”

They sang and he scored. His first United goal in 12 years arrived in first-half stoppage time. It was only a tap-in after goalkeeper Freddie Woodman spilled Mason Greenwood’s shot but it meant everything to Ronaldo.

It was the instinct of a scorer — the most prolific man in international football — and his second after the break was about timing a run to perfection. He was positioned just outside the penalty area to receive a pass from Luke Shaw and put the ball between Woodman’s legs, restoring United’s lead after Javier Manquillo’s equalizer.

Just like he did so often before leaving United for Real Madrid in 2009, Ronaldo reveled in celebrating again in front of the Stretford End where compatriot Bruno Fernandes and Jesse Lingard also scored.

“It was an unbelievable moment,” he said. “I was super nervous and was thinking last night that I wanted to play good and show I was still capable of helping the team.”

He certainly did, after rebuffing an approach from Manchester City to stay loyal to United when Juventus allowed him to leave last month.

This can’t be a return just about nostalgia. He is being signed to regain the English Premier League trophy that City has won four times since United last won the title in 2013.

“I arrived here at 18 and they treat me unbelievable,” he said, “and this is why I am back.”

When Ronaldo left United for Madrid in 2009 after a hat trick of Premier League successes, City hadn’t won the English championship since 1968 and was only a year into its Abu Dhabi-funded revolution. Now United is playing catch-up with its neighbor, although it’s a point ahead after four games in the Premier League, sitting in first place.

“We have to build up the confidence,” Ronaldo said. “The team needs to be mature to win the league and Champions League.”

Ronaldo and Fernandes weren’t the only Portuguese players scoring for a Manchester club on Saturday. Bernardo Silva clinched City’s 1-0 win over Leicester, lifting a shot over goalkeeper Kasper Schmeichel.

One of the greatest threats to United’s first hope of a trophy under Ole Gunnar Solskjær — and a first since the 2017 Europa League — could be Chelsea, especially with its own returning striker.

Unlike Ronaldo, Romelu Lukaku was never appreciated by Chelsea in his first stint from 2011 to 2014. He never even scored at Stamford Bridge, even while playing for Everton or United.

The Belgium striker put that right on Saturday, scoring twice in a 3-0 win over Aston Villa with a a low right-footed shot and high strike into the roof of the net at the end. Mateo Kovacic got the other goal.

Tottenham became the final team to lose its perfect record. After Japhet Tanganga received two yellow cards in the space of five minutes, Crystal Palace used its man advantage to claim a 3-0 win with new signing Odsonne Edouard scoring twice to add to a penalty by Wilfried Zaha.

Brentford’s unbeaten start to its first Premier League campaign ended when Leandro Trossard curled in a shot to give Brighton a 1-0 win.

West Ham does remain unbeaten after Declan Rice cleared a header off the goalline in stoppage time in a 0-0 draw at Southampton.

Pierre-Emerick Aubameyang ended Arsenal’s wait for a goal and some points by clinching a 1-0 win over Norwich, which remains on zero points.