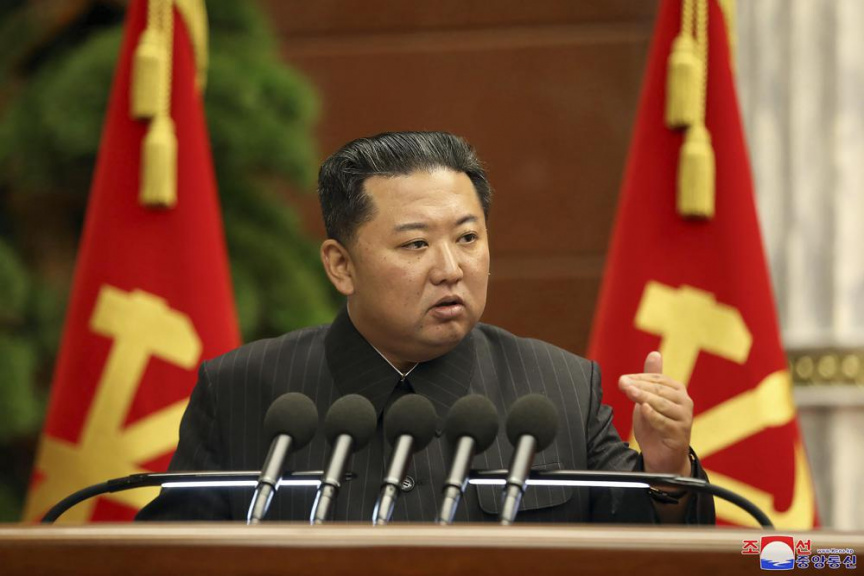 During a Politburo meeting Thursday, Kim said officials must “bear in mind that tightening epidemic prevention is the task of paramount importance which must not be loosened even a moment,” the official Korean Central News Agency reported Friday.

Kim previously called for North Koreans to brace for prolonged COVID-19 restrictions, indicating the nation’s borders would stay closed despite worsening economic and food conditions. Since the start of the pandemic, North Korea has used tough quarantines and border closures to prevent outbreaks, though its claim to be entirely virus-free is widely doubted.

On Tuesday, UNICEF, which procures and delivers vaccines on behalf of the COVAX distribution program, said North Korea proposed its allotment of about 3 million Sinovac shots be sent to severely affected countries instead. North Korea was also slated to receive AstraZeneca shots through COVAX, but their delivery has been delayed.

According to UNICEF, North Korea’s health ministry still said it would continue to communicate with COVAX over future vaccines.

Some experts believe North Korea may want other vaccines, while questioning the effectiveness of Sinovac and the rare blood clots seen in some recipients of the AstraZeneca vaccine.

The previously allocated 1.9 million AstraZeneca doses would be enough to vaccinate 950,000 people — only about 7.3% of the North’s 26 million people — meaning North Korea would still need much more quantities of vaccine to inoculate its population.

“Pyongyang appears to have issues with COVAX involving legal responsibility and distribution reporting requirements. So it might procure vaccines from China to deliver to border regions and soldiers while allocating COVAX shots to less sensitive populations,” Easley said.

“The Kim regime likely wants the most safe and effective vaccine for the elite, but administering Pfizer would require upgraded cold chain capability in Pyongyang and at least discreet discussions with the United States. The Johnson & Johnson option could also be useful to North Korea given that vaccine’s portability and one-shot regimen,” he said.

In a recent U.N. report on the North’s human rights situation, U.N. Secretary-General Antonio Guterres asked North Korea to “take all necessary measures, including through international cooperation and assistance, to provide access to COVID-19 vaccines for all persons, without discrimination.”

He also asked North Korea to form a plan to enable diplomats and aid workers to return to the North and revive humanitarian aid distribution systems as soon as possible in conjunction with its COVID-19 vaccine rollout.

NKorea slams US for supporting Taiwan in nod to China