Police: RDC break-in has no connection to any political figures 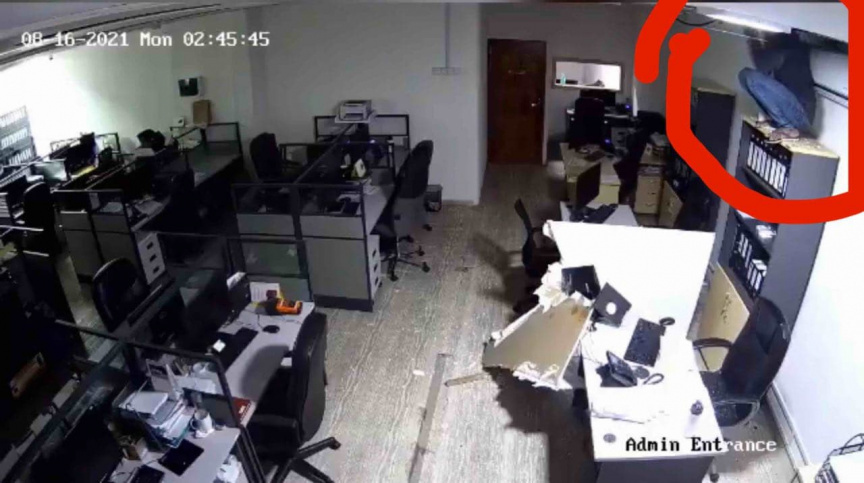 Screen grab from CCTV footage shows thieves break into RDC headquarters through the roof on August 16, 2021.

Maldives Police Service has stated that the break-in to the Road Development Corporation (RDC) headquarters in Male’ City on Monday morning – has no connection to any political figures.

Noting that the Police are investigating the break-in further – they added that the findings of their investigation at this point do not indicate that the break-in was in any way connected to a political figure.

Prior to this, Managing Director of RDC Moosa Ali Manik (Mookey) has alleged that both PPM and PNC are connected to the repeated break-ins to the company’s headquarters. He also stressed no company employee would steal from the company.

“We do possess a lot of information that we do not wish to publicize yet. That is that some senior-ranked PPM and PNC members are involved in this. It is not just RDC – they are also plotting against other government companies as well, and are using juvenile offenders to carry out their plans,” he had said.

In response to Mookey’s allegations, PNC’s Vice President Ibrahim Shujau had stated that they were being accused in order to please the existing supporters of the current administration. He also called on to point fingers at a specific person if a member of the opposition coalition is orchestrating such an act.

RDC headquarters have been broken into on three occasions within the span of this year. They had MVR 100,000 stolen from the office in a break-in back in April.