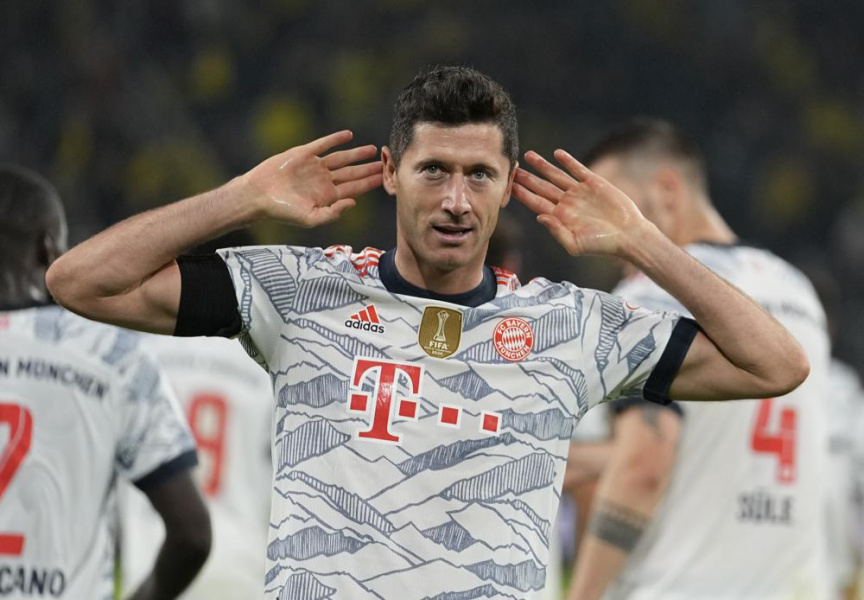 The Poland star, who scored a record 41 goals in the Bundesliga last season, opened the scoring in the 41st minute and got the decisive third goal in the 74th after Marco Reus had pulled one back for Dortmund.

Nagelsmann had endured a difficult start as Bayern had not won any of its four preseason friendlies and was held to a draw at Borussia Mönchengladbach in the Bundesliga’s opening game on Friday.

“I’d like to start hoarding titles,” Nagelsmann said after claiming his first with his first win as Bayern coach. “My predecessor and the players, they collected a lot.”

The Super Cup was preceded by a minute’s silence for former Bayern and West Germany great Gerd Müller, though it quickly became a minute’s applause as Thomas Müller (no relation) held a jersey with Müller’s old No. 9. Müller, who was known as “Der Bomber” for his scoring prowess, died Sunday, aged 75.

Bayern made a better start but the biggest early chance fell to Reus when he was played through by Jude Bellingham. Manuel Neuer produced a brilliant save with his right foot.

Dortmund’s 16-year-old Youssoufa Moukoko thought he’d scored but the goal was ruled out for offside, and Neuer produced another great save to deny Erling Haaland after Kingsley Coman flashed a shot just wide at the other end.

Lewandowski finally made the breakthrough before halftime when he surged through the middle to meet Serge Gnabry’s cross with a thumping header inside the left post.

Dortmund’s defense switched off for Bayern’s second in the 49th, set up by Alphonso Davies and scored by Müller after Lewandowski’s heel took the ball past Gregory Kobel in goal.

Haaland had a goal ruled out for offside in response, but Reus got the home fans going again in the 64th. Bellingham laid the ball back and the Dortmund captain struck a perfect curling shot from outside the penalty area inside the right post.

Lewandowski dashed Dortmund’s hopes of a comeback, however, when Corentin Tolisso blocked Manuel Akanji’s attempted kick out and Lewandowski had all the time he needed to pick his spot.

“Gutted I couldn’t get my hands on the trophy, just like the lads are,” said Bellingham, who was unstoppable at times for Dortmund. “We’ll definitely use it to motivate us in the coming weeks. Now that the game is done, we just want to focus on the next one.”

Leverkusen collapses in 5-2 loss at Frankfurt