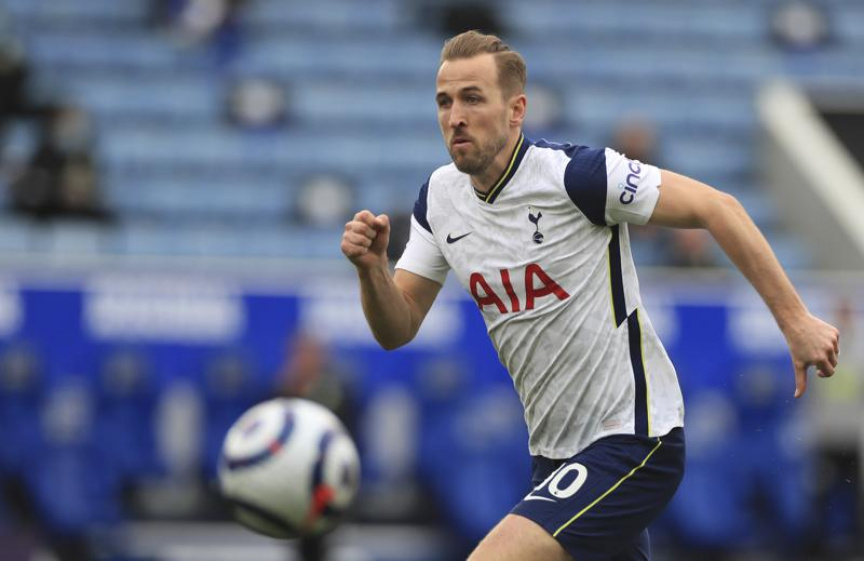 In this Sunday, May 23, 2021 file photo, Tottenham's Harry Kane runs for the ball during the English Premier League soccer match between Leicester City and Tottenham Hotspur at the King Power Stadium, in Leicester, England. (Mike Egerton/Pool via AP, File)

The England captain wants out of Tottenham and has indicated City is his preferred destination.

“Harry Kane is an exceptional, extraordinary striker, no doubts about that,” Guardiola said Friday. “Of course we are very interested in him but he’s a Tottenham player and if they don’t want to negotiate, nothing more to say. If they want to, we will try. That’s all.”

Kane plans to return to training with Tottenham on Saturday — eight days before City visits for the season opener. He said on Twitter that “it hurts” to read comments by fans questioning his professionalism.

“While I won’t go into the specifics of the situation, I want to clarify that I would never, and have never, refused to train,” he wrote Friday. “I will be returning to the club tomorrow, as planned.”

He’s under contract with the north London club until 2024 but has been open with his frustration about the direction of the team and lack of trophies. Tottenham’s seventh-place finish last season left it out of the Champions League.

“He’s a player for Tottenham Hotspur,” Guardiola said. “If Tottenham don’t want (to) negotiate, it’s finished. If they are open to negotiate, of course not (only) Man City, many clubs in the would want to try to sign him, we are not an exception. But it depends on Tottenham.”

Grealish’s contract had a release clause, unlike Kane’s, Guardiola noted.

It might take a new record to persuade Tottenham to sell Kane to a rival.

And Nuno Espirito Santo addressed the issue at his first press conference as Tottenham manager, saying last month: “Look, Harry is our player, period. No need to talk about anything else.”