Nasheed's response: Only thing to show for a statement is my body and heart 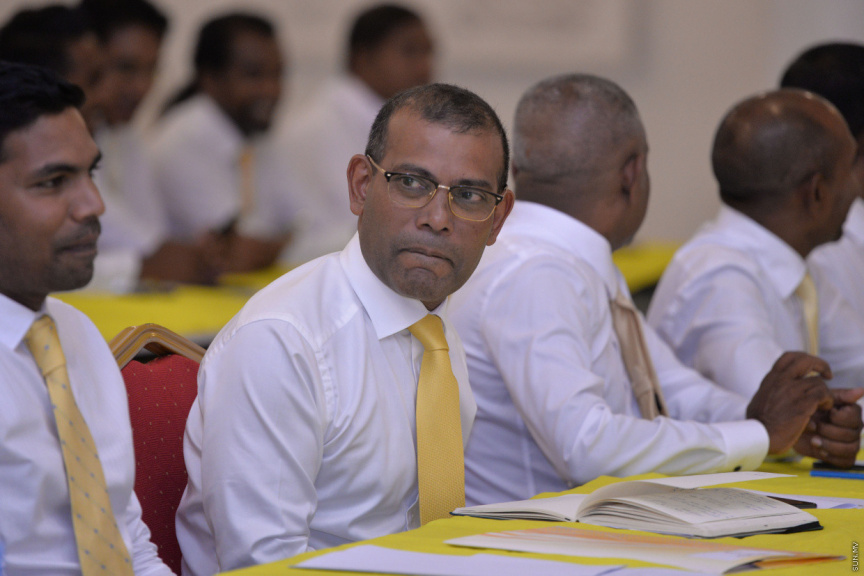 Parliament Speaker, former President Mohamed Nasheed has responded to comments by the police that they have yet to receive a statement from him for the investigation into the IED attack outside his residence on May 6.

In a tweet on Sunday afternoon, Nasheed, 54, said that the only thing he has to show as a word or statement is his "body and heart".

He tagged Commissioner of Police Mohamed Hameed, and said "it wasn't enough that I gave my heart and chest was it?"

Police announced significant progress in the investigation into the May 6 attack in a press conference last Saturday.

Police said they have made 10 arrests in connection to the case, including people involved in planning and executing the attack, and explained each of their roles in the attack.

However, the police said they have yet to receive a statement from Nasheed himself.

At the press conference, Assistant Commissioner of Police Mohamed Riyaz said investigators attempted to get information from Nasheed when he had been in Male’, but he declined to comment given it had been the initial stages of the investigation and he had been in hospital receiving treatment for his injuries.

He said that police made multiple attempts to get Nasheed’s word after that, but without success.

Riyaz said Nasheed has been asked to provide information to investigators via email or letter, as he continues his treatment abroad.

A homemade remote-controlled IED was strapped to motorcycle parked nearby Nasheed’s residence, and was detonated at 08:27 pm on May 6, just as Nasheed exited his residence and went to get in his car. Nasheed was thrown to the ground and sustained multiple shrapnel wounds, while three members of his security detail and two bystanders sustained minor wounds.

Photos documenting his injuries have been publicly released at Nasheed's request via the Parliament and his family.

'Nasheed ready to give statement on May 6 attack'