Officials now say no ban on animal sacrifice in Kashmir 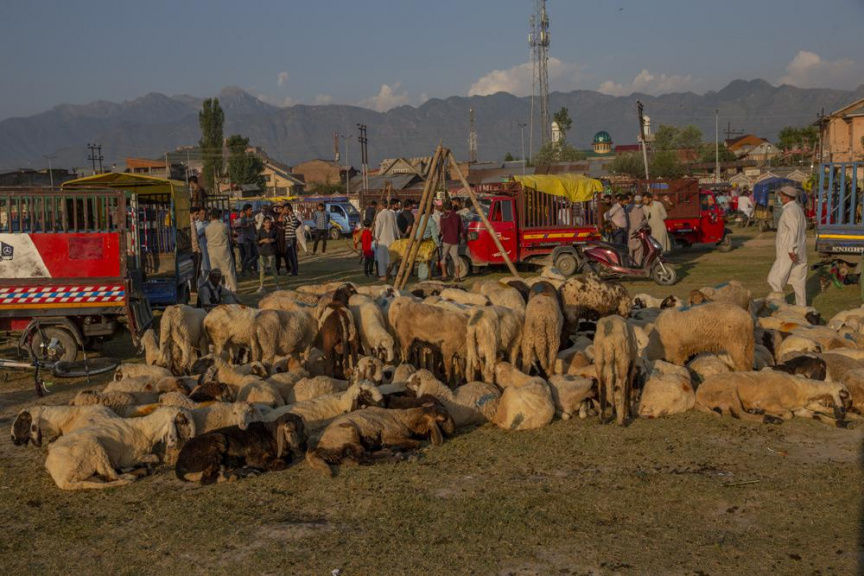 Sheep are kept for sale at a market ahead of the Muslim festival Eid al-Adha, in Srinagar, Indian controlled Kashmir, Friday, July 16, 2021. (AP Photo/ Dar Yasin)

SRINAGAR, India (AP) — Authorities in Indian-controlled Kashmir on Friday said there is no ban on the sacrifice of animals during the upcoming Islamic Eid al-Adha holiday, a day after the government asked law enforcers to stop the sacrifice of cows, calves, camels and other animals.

G.L. Sharma, a senior government official, said the earlier communication was “misconstrued,” and the government had been seeking proper transportation of animals and the prevention of cruelty during the Muslim festival.

“The letter was sent to enforcement agencies to enforce the laws of the Animal Welfare Board and it is at the time there is mass slaughter of animals to prevent cruelty on animals,” Sharma said, according to the local news portal The Kashmir Walla. “This is not a ban on slaughter and sacrifice.”

A government communication addressed to civil and police authorities in the region on Thursday asked them to stop “illegal killing/sacrifices of cows/calves, camels & other animals,” citing animal welfare laws.

Muslims traditionally mark Eid al-Adha, or Feast of Sacrifice, by offering special prayers and slaughtering livestock, usually a goat, sheep, a cow or a camel, to commemorate Prophet Ibrahim’s test of faith. The meat of the sacrificed animals is shared among family and friends and poor people who cannot afford to sacrifice animals.

It caused an uproar in the already restive region with an association of groups of Muslim scholars calling it “arbitrary” and “unacceptable.”

The association, Muttahida Majlis-e-Ulema, said in a statement that “the sacrifice of permitted animals, including bovines” on Eid al-Adha “is an important tenet of religion on this day.”

It urged the government to immediately revoke the “discriminatory order.”

Generally, cows are considered sacred in Hindu-majority India, and slaughtering them or eating beef is illegal or restricted across much of the country. Despite a ban on cow slaughter in Kashmir, beef is widely available across much of its Muslim-majority areas.

This year’s holiday falls on July 21-23 in the region.

Sentiment against Indian rule runs deep in Kashmir, where many Muslim residents seek independence or unification with Pakistan, which controls the other part of the region. Both nuclear-armed rivals claim the territory in its entirety.

Kashmiri Muslims fear that the Indian government led by Hindu nationalist Prime Minister Narendra Modi has begun to alter Kashmir’s demography and identity after stripping the region’s semi-autonomy in 2019.

Since Modi’s ascendance to power in 2014, India has seen a series of mob attacks on minority groups. Most have involved so-called cow vigilantes from extremist Hindu groups. They have usually targeted Muslims, who make up 14% of India’s nearly 1.4 billion people. Hindus account for about 80% of the population.

The victims have been accused of either smuggling cows for slaughter or possessing beef. At least two dozen people have died in such attacks.

'He was our eye': Reuters photographer killed in Afghan