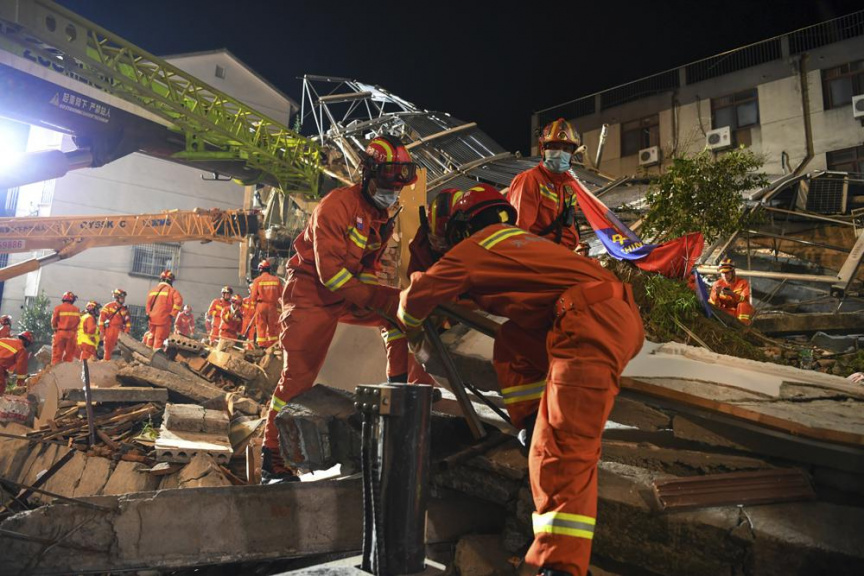 In this photo released by Xinhua News Agency, rescuers prepare equipment as they search for survivors at a collapsed hotel in Suzhou in eastern China's Jiangsu Province on Monday, July 12, 2021. (Li Bo/Xinhua via AP)

BEIJING (AP) — The death toll in the collapse of a hotel in eastern China was raised to 17 Wednesday as authorities ended the search and rescue mission.

The city of Suzhou said on its social media feed that 23 people had been pulled from from the rubble of the Siji Kaiyuan Hotel, which collapsed on Monday afternoon. One of those freed was uninjured and five others were sent to a hospital for treatment.

Rescuers used cranes, ladders, metal cutters and search dogs to look for survivors. Most of those killed were hotel guests.

More than 600 people including earthquake rescue teams and 120 vehicles were mobilized for the operation. Suzhou city is in Jiangsu province near Shanghai.

Investigators would look into the cause of the collapse and police have subpoenaed the hotel’s legal representatives, managers and those who worked on the design and construction of the building, the posting said. Some had been placed under “criminal control measures,” it said, indicating they were under some form of detention or supervision. No numbers or names were given for those under such measures.

The three-floor, 54-room Siji Kaiyuan Hotel opened in 2018, according to Ctrip, a Chinese online booking app.

Suzhou is a popular tourist destination known for its historic canals and traditional Chinese gardens, as well as a major business center.