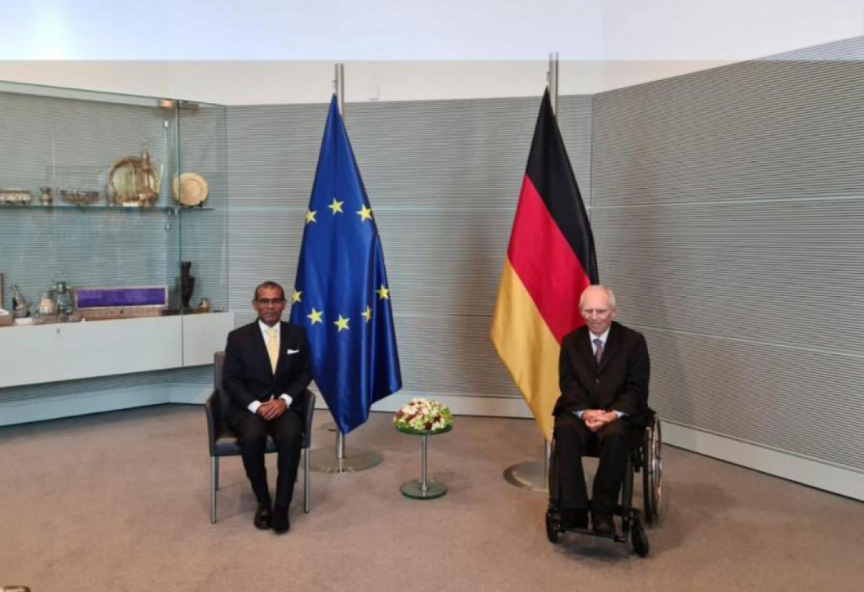 Speaker Nasheed is in Germany, for medical procedures sustained from the terrorist attack which targeted him on May 6. Nasheed met with Wolfgang Schäuble, the Speaker of the German Bundestag yesterday where discussions were held on the relationship between the Maldives and Germany.

Nasheed also thanked Speaker Schäuble for the training programs conducted by the Max Planck Foundation for International Peace and the Rule of Law for Maldivian lawmakers and administrative staff of the Maldivian parliament.

The attackers targeted Nasheed by positioning an IED device on a motorcycle near his residence. The IED exploded as Nasheed left his residence and made his way to his car. As well as Nasheed, his bodyguards and several bystanders were injured in the attack.

So far, four people have been arrested in connection with the attack, including the prime suspect alleged to have detonated the IED. The prime suspect has been identified as Adhuham Ahmed Rasheed (26) from Hiyaa V. Thinadhoo. Others involved in the attack and under detention are Mujaaz Ahmed (21) from Ma. Feyruge, Thahumeen Ahmed (32) from Folheymaa, Ga. Kondey, Ahmed Fathih (23) from Dhunfini Ufaa L. Gan.

Police have alleged that the suspects all harbored extremist views and ideologies.