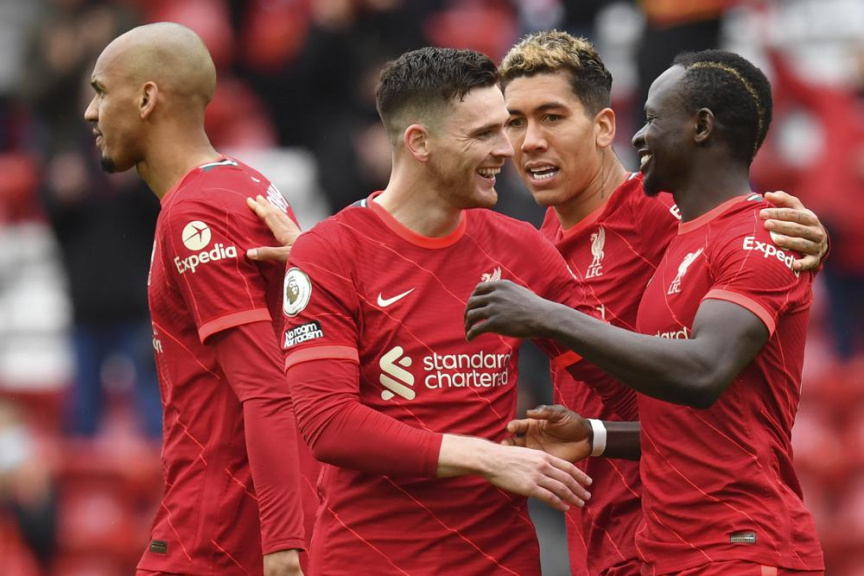 LIVERPOOL, England (AP) — Even though the Premier League finale produced oscillating fortunes in the chase for the Champions League, a chaotic season ended fairly predictably on Sunday.

Liverpool and Chelsea squeezed out Leicester to secure top-four finishes that seemed out of reach at times in a pandemic-compressed season that stretched squads to the limit.

Chelsea could even afford to lose 2-1 at Aston Villa and still take fourth after Leicester was beaten 4-2 by Tottenham.

“There are no celebrations now around the dressing room,” Chelsea manager Thomas Tuchel said. “It’s a big relief.”

Jumping into third was a triumph reflecting Liverpool’s readjusted targets in a season of struggles and injuries after surrendering the trophy to Manchester City, while Manchester United was runner-up.

“From nowhere to the Champions League in five weeks — that’s a massive achievement,” Liverpool manager Jürgen Klopp said after Sadio Mane’s goals clinched a 2-0 victory over Crystal Palace. “I’m really happy for the Champions League they don’t have to play without us.”

That sentiment wasn’t evident a month ago when Liverpool and the rest of the eventual top-four finishers were part of a hastily abandoned bid to split from the UEFA competition to launch a breakaway Super League.

Of the two other English rebels who tried to kill off the Champions League, Arsenal missed out on qualifying for Europe completely with a second successive eighth-place finish despite beating Brighton 2-0 and Tottenham will have to settle with contesting the new third-tier Europa Conference League after taking seventh.

It was just the type of wild climax to a domestic season that would have ended with a Super League locking in permanent places for 15 clubs, including the six from England, without the need for annual qualification.

Leicester, which wasn’t invited to join the breakaway, spent more days in the top four than any other team before dropping out after losing to Chelsea in the penultimate round. Ultimately those 242 days counted for nothing after surrendering the lead to Tottenham when a victory would have dislodged Chelsea.

“We are lucky Tottenham did the job for us,” Tuchel said.

It was an agonizing conclusion for Leicester, which also missed out on breaking up the established elite last season on the final day. At least Europa League-bound Leicester got to parade a trophy on the pitch after winning its first FA Cup last weekend.

The day’s biggest celebrations were in Manchester where City received the Premier League trophy for the fifth time in 10 seasons after signing off in style with a 5-0 win over Everton. The title was won by a 12-point margin that seemed unthinkable in December when Pep Guardiola’s side fell five points from the top. A treble will be completed on Saturday if City beats Chelsea in the Champions League final.

Fittingly, Sergio Agüero scored twice as a substitute after the striker came off the bench for his farewell at the Etihad Stadium after netting the goal that clinched the first of those titles in 2012. The Argentine’s sendoff came in front of the first crowd allowed into the stadium since the start of the pandemic in March 2020 as 10,000 were welcomed back.

It is a sign of the success of the Premier League’s coronavirus protection measures and the government’s vaccination program that turnstiles could be unlocked for the first time in 2021 to allow every stadium to have up to 10,000 fans for the final two rounds — more than any other major European league this year. Jabs were even being administered in a National Health Service bus in an Anfield parking area on Sunday.

A season marked by players taking a knee before kickoff in an anti-racism gesture ended with a reminder of the pernicious aspects of fandom. A Wolverhampton Wanderers supporter was arrested for directing a racist gesture at former Manchester United defender Rio Ferdinand, who was working as a TV pundit at Molineux.

“To the Wolves fan who has just been thrown out for doing a monkey chant at me,” Ferdinand said during United’s 2-1 win, “you need to be dismissed from football and educated.”

Harry Kane netted his 23rd goal of the season in Tottenham’s win at Leicester to finish as the league’s top scorer, one ahead of Liverpool’s Mohamed Salah. It could be his last goal for Tottenham. Winning the Premier League Golden Boot for a third time — on top of a league-leading 14 assists — leaves Kane ruing them failing to deliver a first team trophy in his career.

The offseason will feature a European Championship beginning next month for the England captain and the 27-year-old striker pushing for a transfer from the club where he has spent his entire career.

Gareth Bale left Tottenham in 2013 but returned from Real Madrid on loan this season and took his league tally to 11 with the final two goals that sealed the win at Leicester. A decision has been made on the Welsh forward’s future but he’s not saying.

“It just has to happen after the Euros,” he said. “I know what I’m doing but it’ll just cause chaos if I say anything now.”

Leicester manager Brendan Rodgers distanced himself from the vacancy despite the agony of missing out on the Champions League. Leicester was leading 2-1 with about 15 minutes to go, only for goalkeeper Kasper Schmeichel to punch the ball into his own net before Bale’s double as Rodgers’ side poured forward in search of a winner knowing that Chelsea was losing.

“I feel emotional now that we have just missed out but that motivates me even more to be here and to try to help the club and push them up towards that level,” Rodgers said.

Joining Leicester in the Europa League will be West Ham, which had been in contention for a top-four finish until recently. Still, the 3-0 victory over Southampton sealed sixth for the east London club’s highest finish since 1999.

“Get your vaccines, get your passports, we’re going to Europe,” West Ham manager David Moyes told the crowd.

The three relegation spots were already resolved. Fulham bowed out with a 2-0 loss to Newcastle, while West Bromwich lost 3-1 at Leeds. Last-place Sheffield United signed out on the high of beating Burnley 1-0.