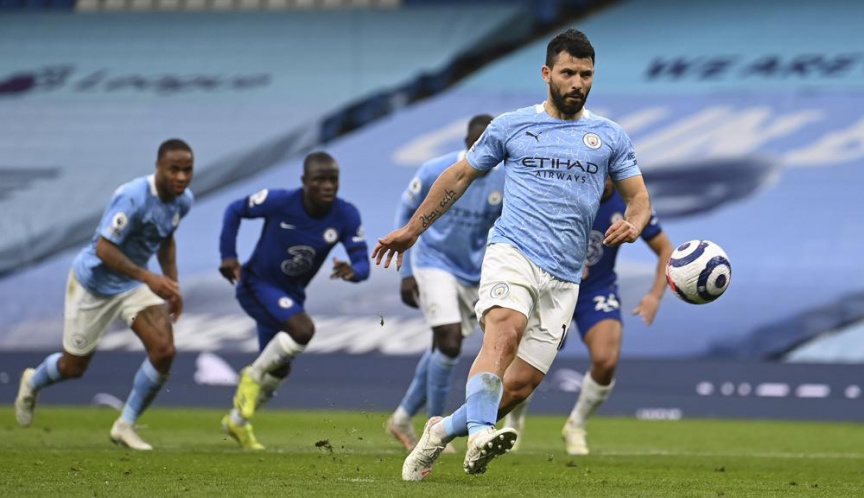 Manchester City's Sergio Aguero shoots a penalty kick during the English Premier League soccer match between Manchester City and Chelsea at the Etihad Stadium in Manchester, Saturday, May 8, 2021. (Shaun Botterill /Pool via AP)

As one world-class center forward prepares for his Premier League finale with Manchester City, another has outlined the reason why playing for Pep Guardiola’s team would be a “striker’s dream.”

Sergio Aguero, City’s all-time leading scorer, will be among the players and coaches saying their goodbyes when the league season reaches its climax Sunday with only a couple of loose ends to tie up.

Fitness issues have blighted Aguero’s final season at City — indeed, Guardiola couldn’t promise Friday the striker would be healthy enough to play against Everton at Etihad Stadium — but that won’t damage the Argentina international’s legacy at both the club and in English soccer.

“He is a guy like Romario,” Guardiola said, referring to the former Brazil striker with a low center of gravity, “in five meters, it’s like a lion in the jungle — making those steps and killing the opponent.

“He has this quality, but his biggest quality is his unique sense of goal.”

Aguero has scored 182 goals in the Premier League — putting him fourth on the competition’s all-time list behind Alan Shearer, Wayne Rooney and Andy Cole — and has a record 258 for City. He potentially has one more game for the club after this weekend, though he is unlikely to feature at all in the Champions League final against Chelsea on May 29.

Replacing Aguero will likely be uppermost in the thoughts of Guardiola and City’s hierarchy during the offseason and Harry Kane has been one of the strikers linked with the newly crowned Premier League champions.

Kane has reportedly asked to leave Tottenham because he isn’t satisfied at the progress of the London club, and one answer he gave in an interview with Gary Neville on the former Manchester United defender’s show, The Overlap, will only give fuel to the speculation.

When Kane was asked by Neville which player would help him score more goals, the England captain said it was City midfielder Kevin De Bruyne “for sure.”

“When I watch De Bruyne play, he’s a special, special player and some of the balls I see him put in for City are just a striker’s dream if I’m honest,” Kane said.

“He’s outstanding ... he’s an outstanding player with the ball, off the ball, pressing, but his delivery is as good as I’ve ever seen to be honest.”

Kane looked emotional as he walked around the field at Tottenham Hotspur Stadium after his team’s final home game of the season, a 2-1 loss to Aston Villa on Wednesday.

It remains to be seen whether a game at Leicester on Sunday is Kane’s last in a Tottenham jersey. If it is, he could go out in style as a Golden Boot winner for a third time.

Kane has scored 165 Premier League goals, 90 behind all-time top scorer Shearer, and said he has no intention of leaving England’s top division.

“Of course, there’s always the option of maybe moving abroad one day,” the 27-year-old Kane said, “but I don’t think that really interests me in the near future.”

It was only 10 months ago that Liverpool entered the final day of the league season with the chance of breaking the record for the biggest title-winning margin in the competition’s history.

On Sunday, there’s a more modest — if far from insignificant — end-of-season target for the deposed champions to chase.

Liverpool is in a three-way scrap, with Chelsea and Leicester, to secure the league’s final two qualification spots in next season’s Champions League. Just a single point separates the teams, one of whom faces the pain of an expected revenue drop of 50-70 million euros ($61-86 million) for failing to get into Europe’s top competition.

Chelsea is in third place ahead of a trip to Aston Villa. Liverpool is a point behind going into a home game against Crystal Palace while fifth-place Leicester, which is behind Liverpool courtesy of an inferior goal difference of four, hosts Tottenham.

“The majority of the season is there for creating a basis for the finish,” Liverpool manager Jurgen Klopp said. “This year, we created it longer. We needed more time.”

Two managers have confirmed they are leaving their clubs at the end of the season.

While Crystal Palace’s Roy Hodgson says he is done with top-level soccer, Nuno Espirito Santo of Wolves likely is only at the start of his Premier League coaching career.