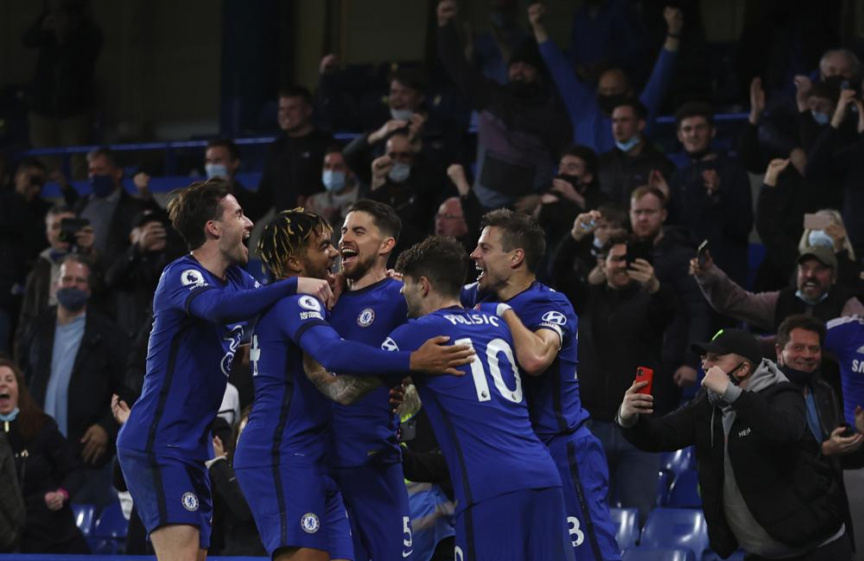 Chelsea's Jorginho celebrates with teammates after scoring his side's second goal from penalty during the English Premier League soccer match between Chelsea and Leicester City at Stamford Bridge Stadium in London, Tuesday, May 18, 2021. (Catherine Ivill/Pool via AP)

LONDON (AP) — Even though “Super Frankie Lampard” wasn’t completely forgotten in the repertoire of songs, Stamford Bridge was finally able to serenade Thomas Tuchel and found so much to be appreciative of.

Having waited since last year to be allowed back into their home, 8,000 Chelsea fans saw a 2-1 victory that dislodged Leicester from third place heading into the Premier League finale.

They also saw why Chelsea, ruthlessly perhaps, fired Lampard in January and replaced the club legend with Tuchel.

“This is a completely different match, football with and without spectators,” the German manager said. “It was amazing and exactly what we want. Everybody who comes to the stadium to be happy and feel this energy from this team because this is what this team can always deliver.”

It wasn’t delivering under Lampard, who left the team five points from the top four. Chelsea will be certain of finishing in one of the four Champions League spots by beating Aston Villa on Sunday.

Oh, and there’s also still a Champions League final to complete the season on May 29 against Manchester City.

What anguish, though, for Leicester. The FA Cup was picked up on Saturday for the first time — by beating Chelsea — and Leicester has been in the top four all 36 rounds. But by the time the 37th round ends, Leicester will have dropped to fifth if Liverpool wins at Burnley on Wednesday.

While the title has already been sealed by Manchester City, and Manchester United will be runner-up, the tussle for the final two Champions League spots is setting up a thrilling final day.

No wonder tensions were so high in the closing minutes at Stamford Bridge as Chelsea and Leicester players squared up and clashed, with even substitutes getting involved.

“It was two sets of players in a competitive situation,” Leicester manager Brendan Rodgers said, “and that’s what happens obviously when you have two games in quick succession and we’re fighting for the points like they are.”

Perhaps they were fired up by the biggest crowd allowed at the west London stadium since the start of the pandemic 14 months ago.

Supporters immediately got back into the rhythm with the familiar abusive songs about VAR and referee Mike Dean. There was a lot to be angry about in the first half as twice Timo Werner put the ball in the net but twice video reviews intervened

VAR was favorable, though, in the second half — advising Dean to award a penalty when Werner was brought down by Wesley Fofana, and Jorginho converted from the spot in the 66th minute.

By that time, Chelsea was already in front after Antonio Rüdiger used his thigh to divert Ben Chilwell’s deflected corner over the line two minutes into the second half.

Kelechi Iheanacho pulling one back for Leicester in the 76th minute set up the type of thrilling climax to a game only enhanced by the return of fans.

But for a second successive season, a Champions League place could be snatched from Leicester on the final day even if it beats Tottenham.

While N’Golo Kante went off for Chelsea with a hamstring injury, İlkay Gündoğan came off with a leg injury in Manchester City’s 3-2 loss at Brighton, 11 days before the Champions League final.

Gündoğan had scored the opener in the second minute before the champions had Joao Cancelo sent off for bringing down Danny Welbeck.

Although Phil Foden doubled City’s lead at the start of the second half, goals from Leandro Trossard, Adam Webster and Dan Burn completed the recovery for 15th-place Brighton.

Manchester United’s protesting fans were back inside Old Trafford — legally this time — and were treated to a wonder goal by Edinson Cavani in a 1-1 draw against already-relegated Fulham.

Spotting goalkeeper Alphonse Areola was off his line, Cavani — helped on by a flick from Bruno Fernandes — chipped the ball from about 50 yards (meters) into the net.

The United fans saw why the team needs more investment to strengthen itself by failing to hold onto the lead when Joe Bryan headed Fulham level.

Placards calling for the removal of the owning Glazer family were held up by some fans as the teams came out for kickoff at the stadium’s first game with fans allowed since March 2020.

“We know it has been a long, long year for everyone,” United manager Ole Gunnar Solskjaer said, addressing the 10,000 fans. “But I’m so grateful to see you back here supporting everyone.”

Around 2½ weeks ago, some United supporters got into the stadium and onto the field during more fervent protests, causing the postponement of a match against Liverpool.

Patrick Bamford scored his 16th goal of the season and Tyler Roberts rolled the ball into the net to give Leeds a 2-0 win over Southampton that clinches a top-half finish in its first season back in the Premier League since 2004.