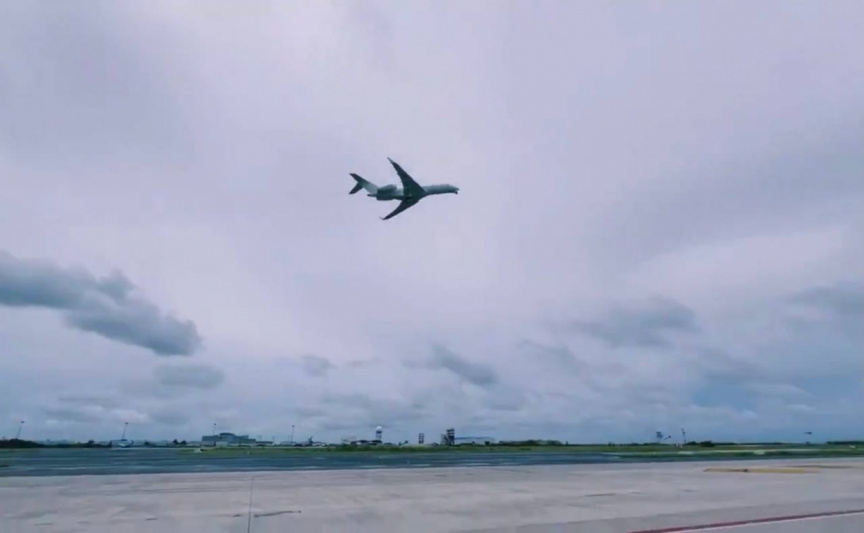 Security was tightened in and around ADK Hospital and the roads Nasheed’s motorcade was scheduled to take to the airport as early as 09:00 am this Thursday, in preparation of his departure to Germany. Large numbers of armed security forces patrolled Majeedhee Magu and the ring road.

The Coastguard were stationed in vessels off the Sinamale’ Bridge, which links Male’ City to the airport.

His motorcade was made up of a large number of security vehicles – including a signal jammer – which surrounded his ambulance.

Nasheed’s motorcade began the journey to the airport at approximately 11:00 am, stopping at a private air ambulance parked at the airport.

Sun has been informed Nasheed was escorted by Ahmed Shahid (Saabe) – the spouse of Deputy Speaker Eva Abdulla – who is Nasheed’s family, and another family member.

Parliament has issued a statement announcing that the cost of the air ambulance and Nasheed’s medical expenses were arranged through the German Honorary Consul designated to Maldives, Christian Freiherr von Stetten. And that all travel arrangements were made by the German government through the Maldivian Foreign Ministry and the Maldivian Embassy in Germany.

Nasheed underwent 16 hours of surgeries at ADK Hospital to remove ball bearings and other shrapnel from his body, some of which tore through his internal organs.

He will continue his rehabilitation and recovery in Germany.

Three suspects have been arrested in connection to the case – including the person believed to have detonated the IED.

President Ibrahim Mohamed Solih has vowed to find the masterminds behind the attack and bring them to justice.