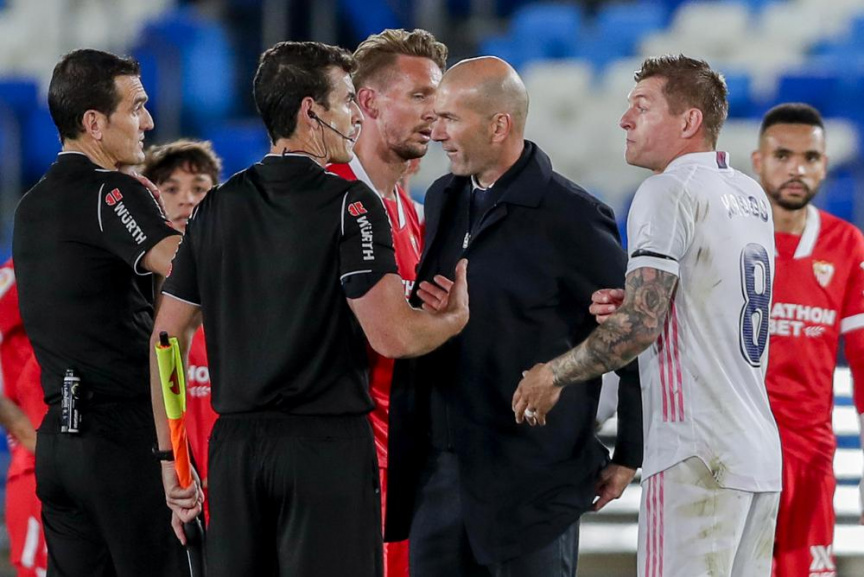 Real Madrid's head coach Zinedine Zidane talks with the referre at the end of the Spanish La Liga soccer match between Real Madrid and Sevilla at the Alfredo di Stefano stadium in Madrid, Spain, Sunday, May 9, 2021. (AP Photo/Manu Fernandez)

MADRID (AP) — After seeing its chance to reach the top of the Spanish league slip away, defending champion Real Madrid turned its anger toward the officials.

Madrid blasted the referee and VAR after Sunday’s 2-2 draw against Sevilla, which kept the club from taking the lead with three rounds to go. The result benefited first place Atlético Madrid, which drew 0-0 with Barcelona at the Camp Nou Stadium on Saturday.

Chasing its first league title since 2014, Atlético stayed two points in front of both second-place Madrid and Barcelona.

The complaints by Madrid came after video review turned a penalty kick for the hosts into one for Sevilla with the game at 1-1 in the second half.

The referee had called a penalty for a foul on Karim Benzema in the 74th minute, but VAR went back to find a controversial handball by Madrid defender Éder Militão a few seconds earlier in the other area. Madrid also had a first-half goal by Benzema overturned for offside by VAR.

Madrid coach Zinedine Zidane couldn’t hold back against the officials.

“I never speak about the referees, but today I’m angry,” said Zidane, who entered the field to question the referee after the match. “I didn’t understand anything. I’m not convinced by anything that he told me.”

Fernando had put the visitors ahead in the 22nd before Marco Asensio evened the match in the 67th. Ivan Rakitic converted the controversial penalty kick in the 78th to put Sevilla in front, and Hazard deflected a shot by Toni Kroos in the fourth minute of injury time to salvage a point for Madrid.

“We let two points slip away,” Madrid midfielder Luka Modric said. “But we are still alive. We’ll try to win the last three matches and see what happens. We’ve seen that every team can lose points.”

Sevilla was six points off the lead and kept a very slim chance of winning its first league title since 1946.

Rakitic said it was a “clear” penalty after Militão’s handball.

“The ball hit his hand and changed direction, to me that’s a penalty,” he said.

Madrid hadn’t conceded in four consecutive league games and had won four in a row against Sevilla in the domestic competition. The late goal kept the defending champions unbeaten in 15 straight games in the league.

Valencia beat Valladolid 3-0 with two goals by Maxi Gómez and one from Thierry Correia, moving the team further away from the relegation zone. The home victory came a day after thousands of fans protested outside the team’s stadium against the club’s Singaporean owner Peter Lim.

Celta Vigo won 4-2 at Villarreal in a match with three penalty kicks, two of them for the visitors in the first half. Sixth-place Villarreal had two players on the bench shown the red card for complaining. Eighth-place Celta was reduced to 10 men late in the match.

Earlier, last-place Eibar kept alive its hopes of escaping relegation with a 1-0 win at Getafe, with Recio converting an 89th-minute penalty kick. Eibar moved within two points from safety after all three teams ahead in the standings lost this weekend.

Spanish media said at least one Numancia player got into a confrontation with fans after the team’s relegation to the fourth division on Sunday. Bats and a knife were reportedly carried by some involved in the altercation after the match. There were no reports of injuries.