Hospital: Shrapnel from blast missed Nasheed’s heart by one centimeter 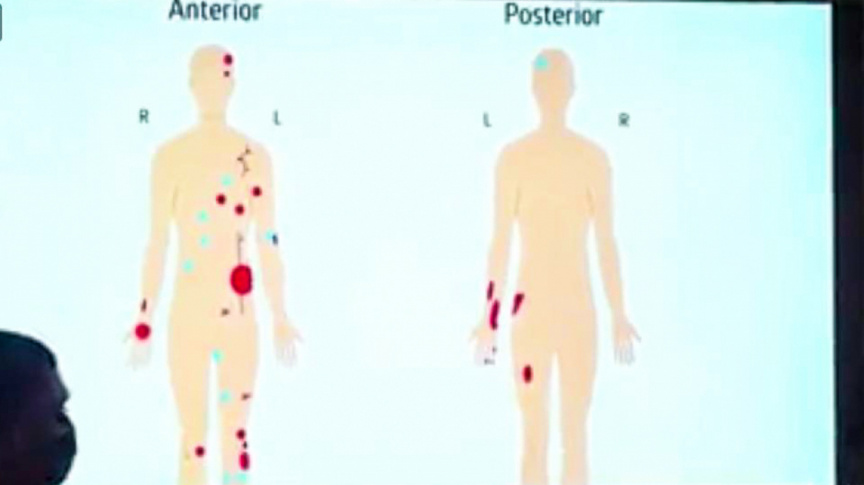 Image released by ADK Hospital shows injuries sustained by Parliament Speaker, former President Mohamed Nasheed in an explosion outside his residence on May 6, 2021.

The blast, treated by police as a targeted terror attack to assassinate Nasheed, 53, took place at 08:27 pm on Thursday.

A homemade remote-controlled IED was strapped to motorcycle parked nearby Nasheed’s residence, and was detonated just as Nasheed, exited his residence and went to get in his car. Nasheed was thrown to the ground and sustained multiple shrapnel injuries, while three members of his security detail and two bystanders sustained minor injuries.

In a press conference on Saturday afternoon, the multi-specialty team treating Nasheed said he was hit with multiple pieces of metal and plastic fragment, which pierced some of his internal organs.

The team showed illustrations as they explained the injuries. The red spots depict where he sustained external injures, the light blue where CT scans showed metal fragments to be lodged, and the dark blue where the doctors examined bleeding spots and found plastic fragments lodged in.

The shrapnel removed from the were all round metal pieces. MNDF said on Friday that the IED was packed with shrapnel.

Dr. Niyaf said the CT scan showed one to be lodged in Nasheed’s lung.

“We found it to be the greatest threat to his life at the time. We prioritized treatment for the injuries to the lungs,” he said.

The treatment for the lungs was carried out by cardiothoracic surgeon Dr. Kaushal and his team. Dr. Kaushal, too, noted that Nasheed sustained deep, life threatening internal injuries.

He said the fragment pierced his lungs after shattering his fourth rib, missing his heart by just one centimeter.

“That was a very dangerous fragment. Luckily, it missed the heart. It was lodged near the heart. But it hit the tissue surrounding the heart,” said Dr. Kaushal.

He said that Nasheed had been bleeding profusely into his thoracic cavity, but that the team removed half a liter of blood, and also removed the fragments from the shattered rib.

Once the cardiothoracic team completed their surgery, the doctors next prioritized attending to the injuries to Nasheed’s abdomen.

Dr. Nishan said the CT scan showed detected three metal fragments in his abdomen, and the team examined the inside of his abdomen using a camera, and found the flesh to be pierced through in three locations.

“In addition to this, there was a lot of blood inside his abdomen. That meant that if the flesh in the abdomen was pierced through, the internal organs would also be damaged. We made the decision on the spot of open his abdomen and evaluate the entire area,” he said.

Dr. Nishan said they found 600-700 milliliters of blood inside Nasheed’s abdomen, and after removing the blood and conducting a systemic evaluation, found the large intestine was pierced through.

“It was pierced in two places. Through and through,” he said.

Dr. Niyaf said Nasheed is currently stable and has passed the major dangers. He said that Nasheed is still at risk of developing infections, and has a long road to recovery.