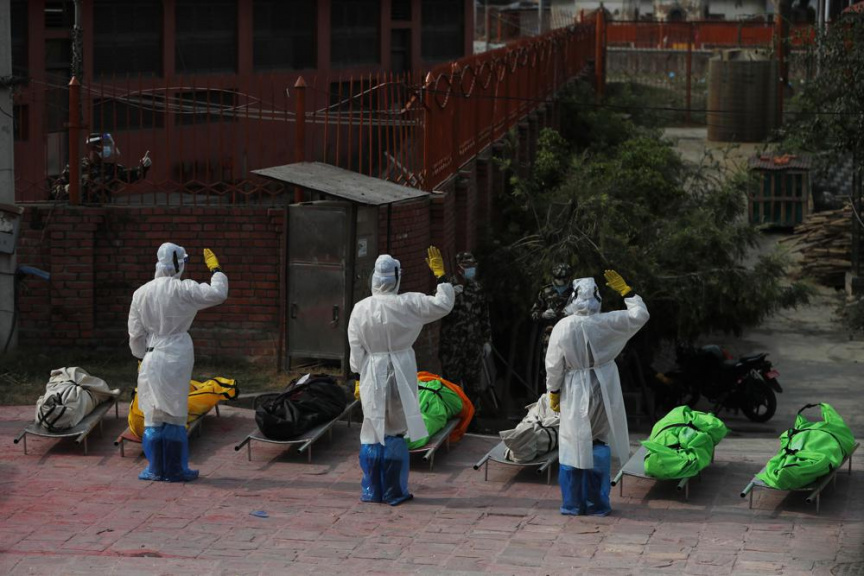 KATHMANDU, Nepal (AP) — Across the border from a devastating surge in India, doctors in Nepal warned Friday of a major crisis as daily coronavirus cases hit a record and hospitals were running out of beds and oxygen.

Nepal reported 9,070 new confirmed cases on Thursday, compared to 298 a month ago. The number of fatalities also reached its highest with 58 on Wednesday and 54 on Thursday, for a total of 3,529.

“Right now there are no beds available today in any hospital that is treating COVID patients,” said Dr. Jyotindra Sharma, chief of Hospital for Advanced Medicine & Surgery in Kathmandu. “Even if any beds were made available, there is a huge scarcity of oxygen and we are not at the peak of this crisis.”

At the hospital, one of the leading facilities in Nepal for treating COVID-19 patients, extra beds were crammed to accommodate more people. They’ve all been taken and the only way to get admitted is through a waiting list.

“In the extreme situation, people could be dying in the streets,” Sharma said, adding it’s “just not possible to immediately increase the capacity of the hospitals.”

At the government-run Tribhuvan University Teaching Hospital, several COVID-19 patients were lying in beds set up on the veranda and hooked to oxygen cylinder. They’re the lucky ones. Others were turned away because there’s not enough space or equipment.

“We are under-prepared, under-resourced, and under-capacitated to perform any thing that is expected,” said Dr. Bishal Dhakal, who has been working with coronavirus patients since the beginning of the pandemic.

A lockdown was imposed last month in major cities and towns, and Nepal this week stopped both domestic and international flights.

The government has pledged several times to increase the number of hospital beds and boost the treatment and preventive measures. However, there has not been any significant change.

Nepal began its vaccination campaign in January with 1 million doses of the AstraZeneca shots donated by India, but it had been suspended because of India’s refusal to allow exports as its crisis worsened.

The vaccination resumed when China donated 800,000 doses, and Nepal is negotiating with Russia for supplies of the Sputnik V shots.

Wreckage of plane with 22 on board found in mountains