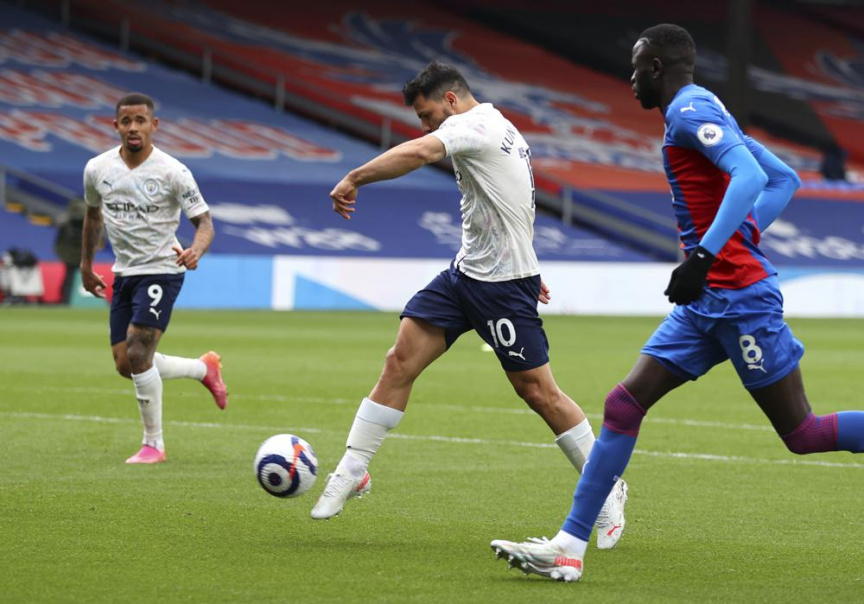 LONDON (AP) — With a stunning goal during his long farewell to Manchester City, Sergio Aguero nudged the team to the brink of another Premier League title on Saturday.

The Argentine striker showed his scoring instincts are still sharp ahead of his departure from City after 10 years by rifling a finish into the roof of the net in the 57th minute to set up a 2-0 win over Crystal Palace.

“What a goal, what an action, what a man,” the City manager said. “We are going to enjoy the last games with him.

Just 84 seconds later, Ferran Torres — a player at the opposite end of his City career — scored the 10th goal of the 21-year-old Spain winger’s debut season in England by curling home a low, left-footed finish from the edge of the area.

It was a one-two blow by Guardiola’s heavily rotated team — due to the game coming between the two legs of the Champions League semifinal against Paris Saint-Germain — which took a while to get going at Selhurst Park but is now within three points of winning the title.

Indeed, It could even be clinched as early as Sunday if second-place Manchester United loses at home to Liverpool.

Asked if the champagne was on ice, Guardiola said with a smile: “We can start to think about putting it in the fridge.”

If United wins or draws at Old Trafford, the next opportunity for City to secure a third league crown in four years will come next Saturday in a home match against Chelsea.

The depth of Guardiola’s resources was highlighted by the fact that he rested most of his key players for the Palace game — Kevin De Bruyne, Ilkay Gundogan, Ruben Dias, Riyad Mahrez and Phil Foden were among the unused substitutes — but could still name a front four of Aguero, Gabriel Jesus, Raheem Sterling and Torres.

None of them will likely start against PSG on Tuesday, with City going into the game leading 2-1 from Wednesday’s first leg.

It was the latest leg of Aguero’s farewell tour and he moved onto 182 Premier League goals, five behind third-place Andy Cole on the all-time list, with his first ever at Selhurst Park.

Benjamin Mendy fed him a pass from the left and Aguero controlled the ball, took a touch and hit a rising shot off his laces and high into the net inside the near post.

Edinson Cavani to stay another season at United

Roma might be a perfect fit for José Mourinho