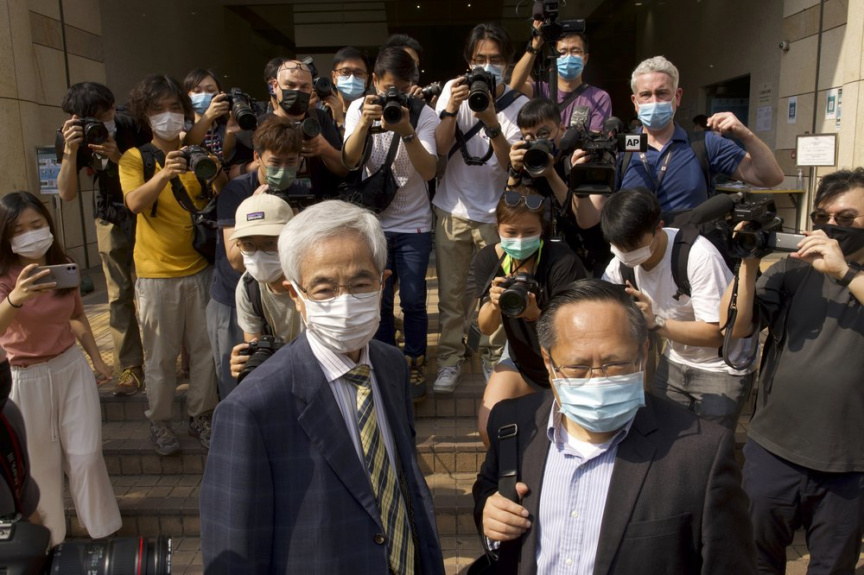 Pro-democracy lawmaker Martin Lee, left, and Albert Ho, right, arrive at a court in Hong Kong Thursday, April 1, 2021. Seven pro-democracy advocates, including media tycoon Jimmy Lai and veteran of the city's democracy movement Lee, are expected to be handed a verdict for organizing and participating in an illegal assembly during massive anti-government protests in 2019 as Hong Kong continues its crackdown on dissent. (AP Photo/Vincent Yu)

HONG KONG (AP) — Seven of Hong Kong’s leading pro-democracy advocates, including a media tycoon and an 82-year-old veteran of the movement, were convicted Thursday for organizing and participating in a march during massive anti-government protests in 2019 that triggered a crackdown on dissent.

The verdict was the latest blow to the flagging democracy movement as the governments in Hong Kong and Beijing tighten the screws in their efforts to exert greater control over the semi-autonomous Chinese territory. Hong Kong had enjoyed a vibrant political culture and freedoms not seen elsewhere in China during the decades it was a British colony. Beijing had pledged to allow the city to retain those freedoms for 50 years when it took the territory back in 1997, but recently it has ushered in a series of measures that many fear are a step closer to making Hong Kong no different from cities on the mainland.

Jimmy Lai, the owner of the outspoken Apple Daily tabloid; Martin Lee, the octogenarian founder of the city’s Democratic Party; and five former pro-democracy lawmakers were found guilty in a ruling handed down by a district judge. They face up to five years in prison. Two other former lawmakers charged in the same case had pleaded guilty earlier.

According to the ruling, six of the seven defendants convicted on Thursday, including Lee and Lai, carried a banner that criticized police and called for reforms as they left Victoria Park on Aug. 18, 2019, and led a procession through the center of the city. The other defendant, Margaret Yee, joined them on the way and helped carry the banner.

Police had given permission for a rally at Victoria Park but had rejected an application from the organizer, the Civil Human Rights Front, for the march.

Organizers estimated that 1.7 million people marched that day in opposition to a bill that would have allowed suspects to be extradited to mainland China for trial — a measure that infuriated Hong Kongers who cherish their distinct justice system and sparked months of demonstrations that sometimes led to violent clashes between protesters and police.

The legislation was eventually withdrawn, but the fuse was lit, and the protesters’ demands expanded to include calls for full democracy. Instead, Beijing has responded by cracking down even harder on dissent, including a new national security law and changes last month that will significantly reduce the number of directly elected seats in Hong Kong’s legislature. As a result of the clampdown, most of Hong Kong’s outspoken activists are now in jail or in self-exile abroad.

“Their conviction is yet another example of Beijing eroding Hong Kong’s freedoms and failing to live up to its international obligations,” White House press secretary Jen Psaki said. The U.N. chief’s spokesman, Stephane Dujarric, said U.N. Secretary-General Antonio Guterres “has repeatedly said there should be no prisoners of conscience in the 21st century, and he’s always underscored the right to peaceful assembly.”

Former lawmaker Lee Cheuk-yan, who was among those convicted Thursday, expressed disappointment in the verdict, saying he and his fellow residents have the constitutional right to march. Lee is known for helping to organize annual candlelight vigils in Hong Kong on the anniversary of the bloody crackdown on pro-democracy protests in Beijing’s Tiananmen Square in 1989.

“We are firm that we have the right to assemble,” he said. “It is our badge of honor to be in jail for walking together with the people of Hong Kong.”

Six of the nine defendants in the case have been released on bail on the condition they do not leave Hong Kong and they hand in all their travel documents. They are due back in court on April 16, where mitigation pleas will be heard before sentencing.

Lai is among those who remains jailed on other charges, including collusion with foreign forces to intervene in the city’s affairs, a new crime under the national security law imposed on the city in 2020 by the central government in Beijing.

The law has put a chill on dissent, all but quashing public protest, which was already diminished because of the COVID-19 pandemic. Authorities have used the sweeping legislation to arrest prominent pro-democracy advocates. They have also detained activists on other charges, such as participating in illegal assemblies.

Lee, a former lawmaker, has been an advocate for human rights and democracy in the city since the former British colony was returned to China in 1997, though he disagreed with the violent tactics adopted by some of the protesters in 2019.

Ahead of Thursday’s court session, some of the defendants and their supporters gathered outside the court, shouting “Oppose political persecution” and “Five demands, not one less,” in reference to demands by democracy supporters that include amnesty for those arrested in the protests as well as universal suffrage in the territory.

Hong Kong to kill 2K animals after hamsters get Covid