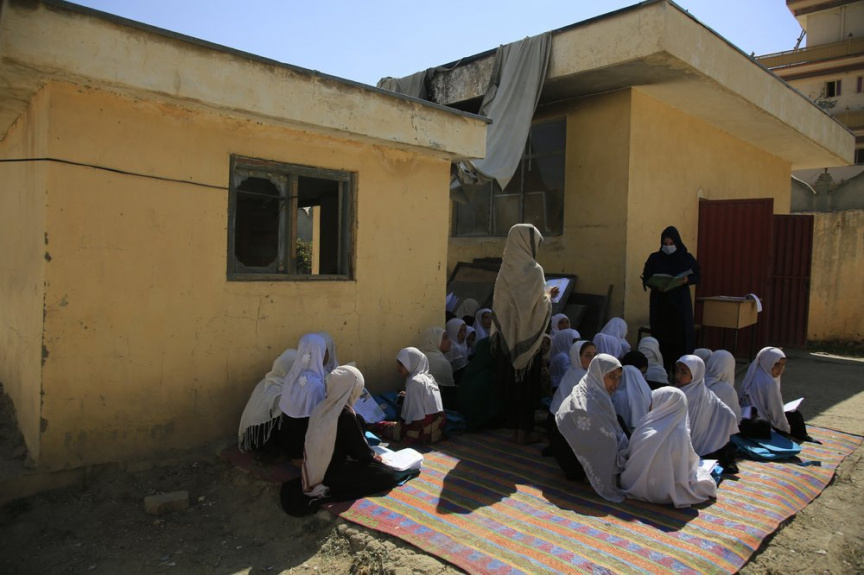 KABUL, Afghanistan (AP) — A memo from Afghanistan’s education ministry banning girls 12 years old and older from singing at school functions has been causing a stir on social media, prompting the authorities to say it was a mistake and that its authors had misunderstood the objective.

Still, #IAmMySong is gaining traction on Twitter, with some Afghan girls singing their favorite tunes for the camera and calls popping up for petitions to oppose the directive.

The controversy comes as women’s rights activists and civil society groups are fighting to ensure that fragile human rights gains made over the last 20 years in Afghanistan — since the U.S.-led invasion ousted the Taliban regime — take center stage in the peace talks underway with the insurgents. It also shows how the rights of girls and women are under threat from conservatives on both sides of the protracted conflict.

“This is Talibanization from inside the republic,” Sima Samar, an Afghan human rights activist of nearly 40 years, said on Friday. When they ruled the country, the Taliban — notorious for their repression of women — denied girls the right to education. Music, except religious songs, was also banned, as was television.

The memo, which went to all school districts in Kabul, was rescinded, said ministry spokeswoman Najiba Arian, insisting that its authors had misunderstood the purpose. A new memo was subsequently sent, saying music groups for both secondary school girls and boys are banned.

The objective was not to ban girls singing but to prevent boys and girls from participating in public events that could spread the coronavirus, she said. Afghanistan has recorded more than 55,000 cases of the virus and 2,451 deaths but testing is inadequate and the real numbers are believed to be far greater.

The hashtag campaign was started by Ahmad Sarmast, the founder of Afghanistan’s Institute of Music. It has had over 600,000 clicks, according to Haroon Baluch of BytesforAll, a Pakistan-based rights organization that monitors internet traffic. He also said the trend is building.

Sarmast said he began the #IAmMySong to “let authorities know that the people of Afghanistan oppose this decision and they will stand for the rights of the children, whether boys or girls.”

The memo, a copy of which was seen by The Associated Press, does not mention the pandemic or any health concerns. Rather it clearly states that girls older than 12 cannot perform in any public events and that singing at such events is strictly forbidden. It goes on to say that only female teachers can teach music to girls older than 12.

“The education department of Kabul city, all government, private sector and literacy centers are seriously advised not to let female students . . . above 12 years of age participate and sing in any type of events or general programs,” it said, with the exception of all-female gatherings.

Samar, who launched Afghanistan’s Independent Human Rights Commission in 2002 and served as its head until 2019, said the directive violates basic human rights. It also violates the United Nations Convention on the Rights of Children, to which Afghanistan is a signatory, she added.

The memo violates both national and international law, Sarmast said. According to one tweet, 100,000 signatures have been collected throughout several Afghan provinces to protest the directive.

After the fiasco of the first memo, a second one went out. It banned both boys and girls older than 12 from singing or performing in public — an even more shocking directive as it takes “the right of choice and freedom of expression away from all students in secondary and high schools,” Sarmast said.

The education ministry has had to deal with other missteps recently. In December, it came under attack after suggesting children in first through third grade should be taught in mosques. After a furor erupted, the ministry was forced to correct itself, saying it was referring to rural areas where there are no school buildings so mosques are the only option for some of the country’s poorest.

Schools linked to mosques are known as madrassas and are often attended by the country’s poorest. The Ministry of Interior was said in January to be preparing to register thousands of madrassas operating in the country.

Focusing mostly on religious education rather than language, liberal arts and science, madrassas are run by hard-line clerics. They have also been accused of propagating jihad or holy war and spreading intolerance between Islam’s two major sects, Sunni and Shiite Muslims.

US to withdraw all troops from Afghanistan by Sept. 11