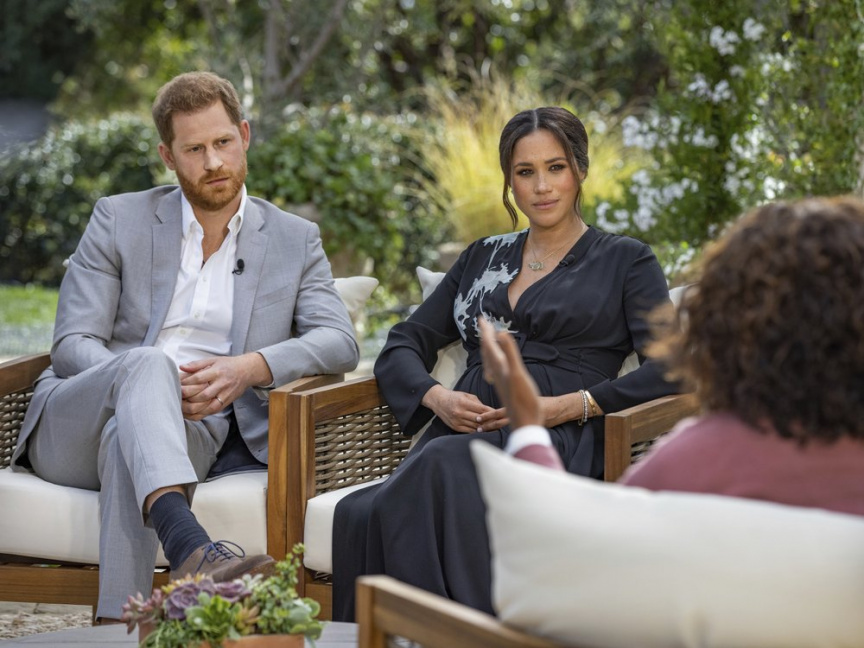 LOS ANGELES (AP) — In a wide-ranging interview aired Sunday, Harry and Meghan described painful palace discussions about the color of their son’s skin, losing royal protection and the intense pressures that led the Duchess of Sussex to contemplate suicide.

The interview with Oprah Winfrey was the couple’s first since they stepped down from royal duties and the two-hour special included numerous revelations likely to reverberate on both sides of the Atlantic.

Harry told Winfrey that he felt trapped by royal life and was surprised that he was cut off financially and lost his security last year. He also said he felt his family did not support Meghan, who acknowledged her naivete about royal life before marrying Harry, as she endured tabloid attacks and false stories.

Meghan, who is biracial, described that when she was first pregnant with son Archie, there were “concerns and conversations about how dark his skin might be when he’s born.” The statement led Winfrey to ask “What,” incredulously and sit in silence for a moment.

In a rare positive moment in the interview, Harry and Meghan revealed their second would be a girl. The interview opened with Winfrey gushing over Meghan’s pregnancy and lamenting that COVID-19 protocols kept them from hugging.

The interview was in the United States a full day before it will air in Britain. The revelations aren’t over: Winfrey teased additional bits of the interview would be shown Monday morning on CBS.

In response to a question from Winfrey, Harry said he wouldn’t have left royal life if not for his wife, the actor formerly known as Meghan Markle who starred in the TV drama “Suits.” He said their relationship revealed the strictures of royal life.

“I wouldn’t have been able to, because I myself was trapped,” Harry said. “I didn’t see a way out.

“I was trapped, but I didn’t know I was trapped,” Harry said, before adding, “My father and my brother, they are trapped.”

Harry acknowledged that he does not have a close relationship presently with his brother William, who is heir to the throne after their father, Prince Charles.

Winfrey at various points in the interview ran through headlines about Meghan and at one point asked about the mental health impact. Meghan responded that she experienced suicidal thoughts and had sought help through the palace’s human resources department, but was told there was nothing they could do.

“I was really ashamed to say it at the time and a shame to have to admit it to Harry, especially because I know how much loss he suffered,” she said. “But I knew that if I didn’t say it that I would do it. And I just didn’t, I just didn’t want to be alive anymore.”

Meghan said she grew concerned about her son not having a royal title because it meant he wouldn’t be provided security.

Meghan said processing everything while pregnant was “very hard.” More than the “prince” title, she was most concerned about her son’s safety and protection.

“He needs to be safe,” a teary-eyed Meghan recalled. “We’re not saying don’t make him a prince or princess, whatever it’s going to be. But if you’re saying the title is going to affect their protection, we haven’t created this monster machine around us in terms of click bait and tabloid fodder. You’ve allowed that to happen, which means our son needs to be safe.”

Harry, too, said there are lasting impacts about Meghan’s treatment and his relationship with his family.

“There is a lot to work through there,” Harry said about his relationship with his father. “I feel really let down. He’s been through something similar. He knows what pain feels like. And Archie is his grandson. I will always love him, but there is a lot of hurt that has happened.”

Harry said the royal family cut him off financially at the start of 2020 after announcing plans to step back from his roles. But he was able to afford security for his family because of the money his mother, Princess Diana, left behind.

Harry disputed rumors that he intentionally blindsided his grandmother, Queen Elizabeth II, with his decision to split. He suspects the rumors came from the institution.

“I’ve never blindsided my grandmother,” he said. “I have too much respect for her.”

Meghan, too, was complimentary toward the queen, despite saying at one point she realized some in the palace were willing to lie to “protect other members of the family.”

“The queen has always been wonderful to me,” Meghan said.

Sunday’s interview special opened with Meghan describing how naive she was about the ground rules of royal life before she married her husband, Harry, nearly three years ago. “I didn’t fully understand what the job was,” she said. She also noted that she did not know how to curtsy before meeting Queen Elizabeth II for the first time, and didn’t realize it would be necessary.

Meghan said she and Harry were aligned during their courtship because of their “cause-driven” work. But she did not fully comprehend the pressure of being linked to the prestigious royal family.

“There was no way to understand what the day-to-day was going to be like,” she said. “And it’s so different because I didn’t romanticize any element of it.”

The couple married at Windsor Castle in May 2018, and their son, Archie, was born a year later. Harry and Meghan’s departure from royal duties began in March 2020 over what they described as the intrusions and racist attitudes of the British media toward the duchess.

At the top of the interview, Winfrey said no topic was off limits and that Meghan and Harry were not being paid for the special.

In Britain, the interview is seen as poorly timed. It will air while Harry’s 99-year-old grandfather Prince Philip remains hospitalized in London after undergoing a heart procedure.

It is unclear what public reaction, if any, the queen and other royal family members will have to Sunday’s interview. The U.K.’s Sunday Times newspaper, citing an anonymous source, reported that the queen would not watch it.