No bail for Indian climate activist over farmer protests 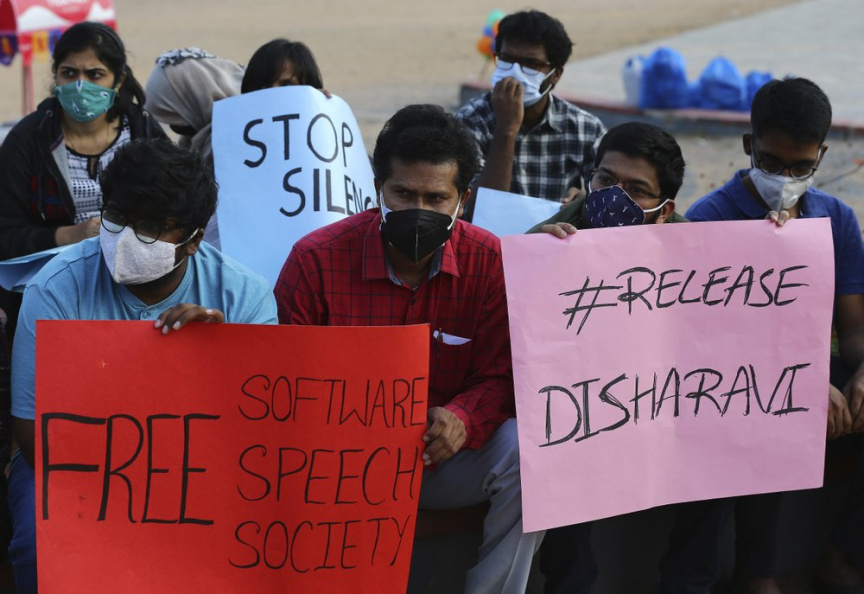 Activists participate in a silent protest against the arrest of environmental activist Disha Ravi in Hyderabad, India, Saturday, Feb. 20, 2021. (AP Photo/Mahesh Kumar A.)

NEW DELHI (AP) — A 22-year-old Indian climate activist who is facing sedition charges for her alleged role in the creation of an online document intended to help amplify farmer protests did not get bail Saturday after a court said it will reserve its order for next week.

Ravi is part of the Indian wing of Fridays for Future, a global climate change movement founded by Swedish teenage climate activist Greta Thunberg. She was arrested last week at her home in the southern city of Bengaluru by New Delhi police.

Officials have said that the document Ravi shared on social media spread misinformation about the ongoing protests by farmers and “tarnished the image of India.”

Ravi did not speak herself in the court but denied the accusations against her through her lawyer Siddarth Agarwal, who argued that the document, which the authorities are calling a “toolkit,” was a mere “resource document” used by social activists for campaigning.

Agarwal said that police had no evidence to back up its claims that the document was responsible for the violence during the farmers’ march on Jan. 26, India’s Republic Day, when the until then largely peaceful protests erupted into clashes with police.

Earlier this week, police said the document shared on social media indicated that there was a “conspiracy” behind the violence in which one protester was killed and hundreds of police and demonstrators were injured.

Tens of thousands of farmers have camped outside New Delhi for months in protest against new agricultural laws that they say will devastate their livelihood. The protests have posed a major challenge to Prime Minister Narendra Modi’s Hindu nationalist government, which says the laws are needed to modernize Indian farming.

Police have registered a case of sedition against Ravi, which carries a maximum sentence of life in prison.

Prosecutions under colonial-era sedition law are rare, but successive governments have used it to silence journalists, critics and dissenters in India. Official data shows that Modi’s government has used the law more than any other — up by nearly 30%.

“If highlighting the farmers protest on the global platform is sedition, then I’m guilty,” Agarwal told the court on Ravi’s behalf.

The court asked police to present evidence that links the Jan. 26 violence with the document climate activist shared on social media.

“Is there any evidence? Or are we on surmises or conjectures?” the court said.

Ravi’s arrest, which comes after the government ordered Twitter to block certain accounts and charged journalists with sedition earlier this month, has drawn widespread condemnation within India and overseas. Critics and opposition parties say her case highlights a growing crackdown on dissent under Modi’s government and have called her arrest harassment, intimidation and an attack on democracy.

Protests in multiple Indian cities were held this week, with demonstrators pressing for her immediate release.

On Friday, Thunberg sent out two tweets with a hashtag supporting Disha.

“Freedom of speech and the right to peaceful protest and assembly are non-negotiable human rights. These must be a fundamental part of any democracy. #StandWithDishaRavi,” Thunberg tweeted.