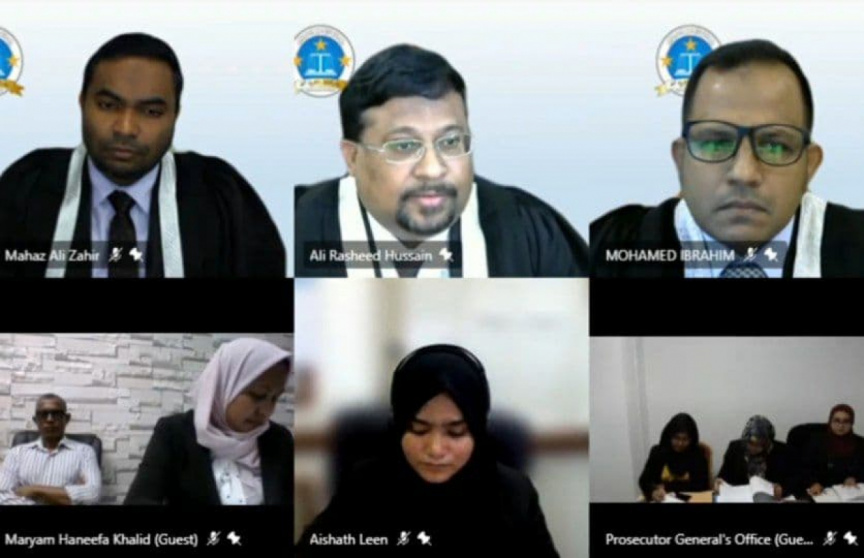 Supreme Court hearing in the appeal case of Hamid Ismail.

The Supreme Court of the Maldives has decided that the testimony of former Vice President Ahmed Adeeb in the appeal case of Hamid Ismail, convicted for his role in the MMPRC scandal is not admissible as new evidence.

The acquisition costs were deposited into a bank account of Millennium Capital Management Private Limited of which Hamid Ismail owns shares. Charges against Hamid also include misuse of these funds.

The Criminal Court had sentenced Hamid to two years and 18 months in prison for the charges, a conviction upheld by the High Court.

Hamid was freed in 2018 after completing his sentence but submitted an appeal to the Supreme Court today regarding the case. A hearing of the case held today, saw points of appeal presented.

In today’s hearing, the state requested to submit the testimony of Adeeb, something which Hamid and his lawyers opposed because Adeeb was also charged for his involvement in the crime.

After a short intervention for discussions on the point, Justice Ali Rasheed presiding over the bench of justices in today’s hearing ruled that the testimony was inadmissible because Adeeb was also charged alongside Hamid in the crime.

Adeeb has admitted to the crime and the state has used testimony by him to convict others involved in the scandal under a plea deal with a sentence of 20-years. The state requested the Supreme Court to take into account the conviction of the Criminal Court and the upholding of the conviction by the High Court in Hamid’s case. Hamid, however, argued that the state had failed to clarify his involvement in the scandal.

Ziyath agrees to confess to 32 charges under plea deal

SC rules Yauqoob has not lost his parliamentary seat

Sultans of the Seas ordered to pay MVR 110 million