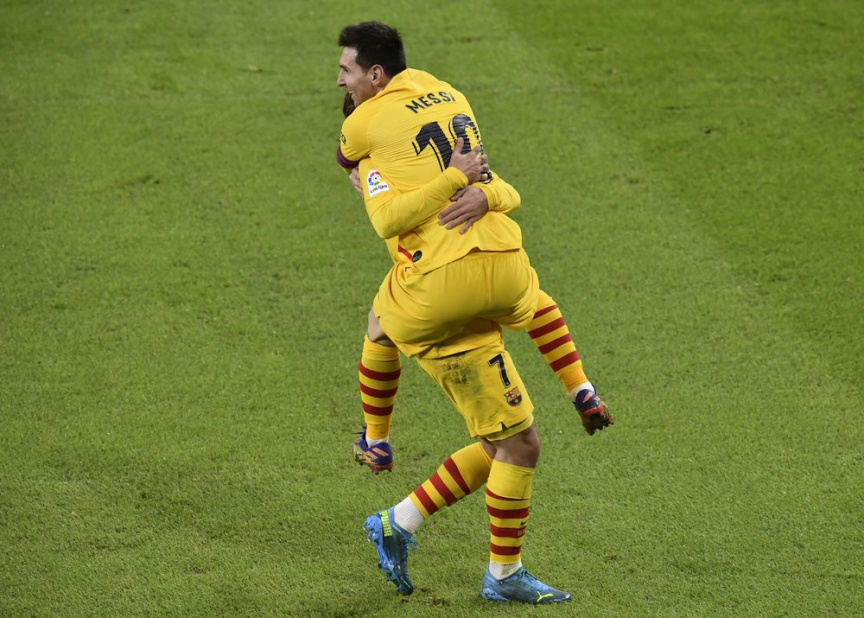 BARCELONA, Spain (AP) — Lionel Messi scored two goals to lead Barcelona to a 3-2 win at Athletic Bilbao in the Spanish league, while Atlético Madrid was ousted from the Copa del Rey by a third-tier side on Wednesday.

Teenager Pedro “Pedri” González canceled out Iñaki William’s opener for Bilbao before Messi added two goals to secure an away win for Barcelona that lifted it into third place.

Atlético leads the league but lost 1-0 at third-tier Cornellà in the Copa del Rey’s round of 32 — a result that means Diego Simeone’s side can focus even more on the La Liga title race.

It’s the second year in a row that Atlético lost to a third-tier team in the cup competition, after a 2-1 defeat to Cultural Leonesa.

“Our rivals have played better,” Atlético coach Diego Simeone said. “We had some good attacking moves, but overall our rival (Cornellà) always played better. They took advantage of the set piece and got their goal. It was even more uphill after the sending off. Now we have to find solutions.”

Atlético is not alone in getting caught off-guard. Third-tier sides also ousted topflight teams Celta Vigo and Getafe on Tuesday.

But Atlético has been the biggest victim of the change in format of the Copa del Rey two seasons ago. Before last season, each round was played over two legs, giving bigger clubs chances to come back at home if they slipped up away. Now, all rounds except for the semifinals are played in one leg at the lower-seeded side.

Still, a team like Atlético had no business losing at Cornellà, a club based in a working-class neighbors on the outskirts of Barcelona.

Atlético is the front-runner to win the league title. It has only lost once in 15 rounds in the Spanish league and is set to face Chelsea in the Champions League’s round of 16 in February.

Cornellà, meanwhile, has had a ho-hum season in its group in the third tier, with three wins, two draws and four losses leaving it in seventh place.

Even before the visitors lost defender Ricardo Sánchez to a second booking in the 65th minute, they had not proven to be superior.

Cornellà defender Adrian Jiménez scored the game’s only goal in the eighth minute from a cross by Agus Medina to the near post.

Atlético was never comfortable on Cornellà’s artificial turf. The closest it came to equalizing was Saúl Ñíguez’s shot off the woodwork midway through the first half.

Atlético lost center back José Giménez after he injured his left ankle early on. João Félix also left the match in the second half after he hurt an ankle.

Cornellà coach Guillermo Fernández told Simeone he “was sorry” for the result.

“I said what I felt,” Fernández said after the match. “For these clubs, which are under so much pressure, these matches are very uncomfortable. For us today is a special day. I said before the match we would need to play an exceptional match, and that is what we did -- and we had that bit of luck we needed.”

Williams gave Marcelino García Toral a perfect start to his debut match as Bilbao’s new coach in the third minute. The forward broke free down the left flank, cut back inside Clement Lenglet, and drilled a low shot under goalkeeper Marc Andre ter Stegen.

But once Messi and Pedri started to click, Barcelona dominated the game except for a lone goal by Iker Munian in the 90th minute after a poor pass by Messi.

Pedri equalized in the 14th when he headed in a ball knocked back by Frenkie de Jong after Messi had met his long run into the area with a precise lob from distance.

The 18-year-old Pedri then turned playmaker when he used a no-look pass by rolling the ball backwards to set up Messi in the 38th.

Messi made it 3-1 in the 62nd by firing a pass from Antoine Griezmann off the underside of the bar and into the net.

Messi, who also hit the woodwork twice, tarnished his otherwise brilliant game when his poor pass was picked off by Bilbao near the area, allowing Muniain to score.

Barcelona coach Ronald Koeman praised his team and credited the strong play of Pedri and De Jong in midfield.

“It is always important to have good players, above all in the midfield; that is where you can dictate the game,” Koeman said. “With players like Frenkie, (Sergio) Busquets, Pedri and Leo (Messi) we always had an extra man and they dictated the game. Pedri is one of those players. I am not surprised that is playing at a great level compared to the rest.”