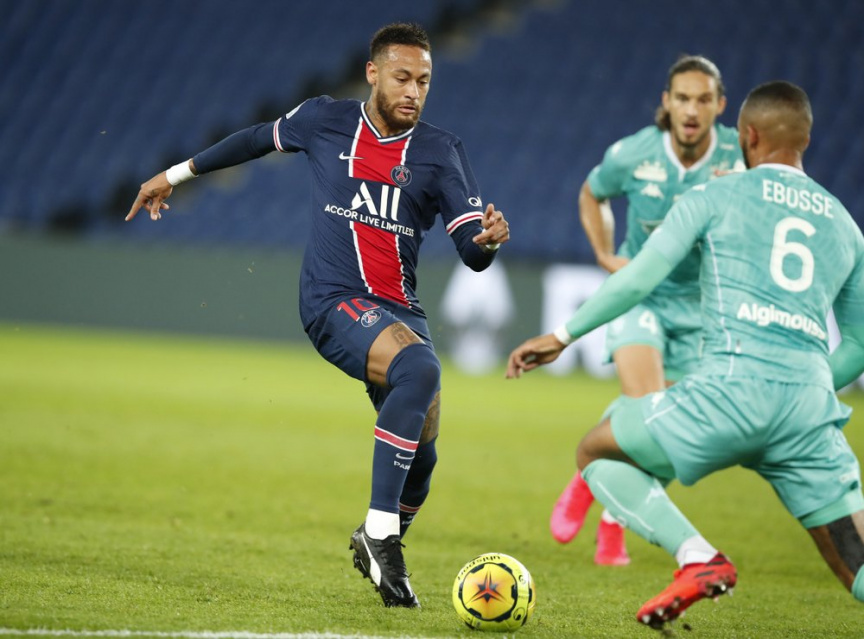 PSG's Neymar, left, battles for the ball with Angers' Enzo Ebosse during the French League One soccer match between Paris Saint-Germain and Angers at the Parc des Princes in Paris, France, Friday, Oct. 2, 2020. (AP Photo/Francois Mori)

PARIS (AP) — Neymar scored his first goals of the season to help Paris Saint-Germain make up some lost ground in the French league with a 6-1 rout of visiting Angers on Friday.

PSG moved up to second in the sixth round after winning four games straight. The defending champion started with two defeats.

But the home side did not have to wait long for the breakthrough, a fine goal from Alessandro Florenzi in the seventh minute. The Italian defender lifted the ball over an opponent with his fist touch, then lobbed it over another defender inside the far post with his next. It was his first goal for PSG since his summer switch from Roma.

Neymar was next to test the ’keeper, but Bernardoni wasn’t beaten until the 36th, when Mbappé cut in between two defenders before teeing the ball up for Neymar to shoot in off the underside of the crossbar.

The Brazilian got his second goal from close distance in the 47th, and Angers defender Ismael Traoré pulled one back in the 52nd as the home side relaxed.

But Julian Draxler’s goal in the 57th removed any notion of suspense, substitute Idrissa Gueye made it 5-1 in the 71st, and Mbappé wrapped up the scoring in the 84th.

Suárez says he spent days in tears amid rift with Barsa