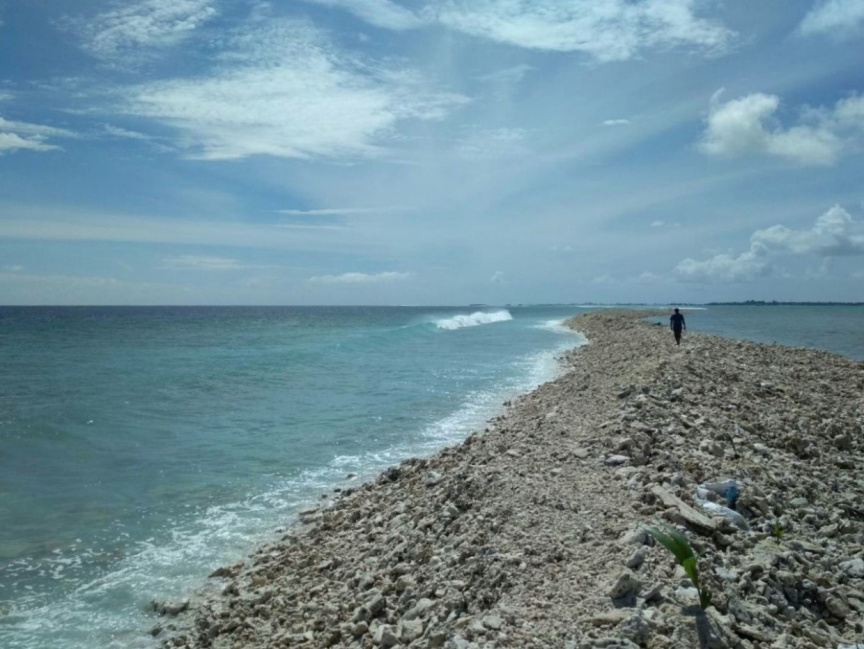 A spell of bad weather in mid-July 2020 caused the formation of a small landmass known as a Huraa'gandu near Meedhoo, Addu City. (Photo/Nalafehi Meedhoo)

The mid-July bad weather formations in the Indian Ocean affected all regions of the Maldives. Regions of the country observed tidal waves, storm surges as well as sea swells.

Two days after the weather calmed down, residents of the southern island of Meedhoo, Addu City who went out to the coastline, saw something extraordinary. Something they had never before seen in the area. A newly formed "island" in the lagoon of Ismahela Hera.

“The islanders faraway, saw something that looked like an emerged reef. Because it was not there before, they noticed it.” Said Ahmed Zuhair from the Nalafehi environmental organization in Meedhoo.

When the islanders went to the location, they saw a massive landmass formed of rocks (Huraa'gandu). The landmass was formed about a kilometer away from Ismahela Hera towards Hithadhoo. Some areas of the Huraa'gandu were around 7 feet above sea level. In total, it had a length of around a kilometer.

“Rocks were deposited and it (Huraa'gandu) formed during the storm surges of the recent the bad weather. Around 6 or 7 feet above sea level. Some areas had a width of 20-25 feet and in length had around 3,000 feet (nearly a kilometer).” Said Zuhair.

Addu City Council’s Meedhoo member Hussain Hiyaaz said that the Huraa'gandu was formed on the Futtaru side of the island. The Futtaru side of an island is one that does not have a natural beach and where waves keep on crashing.

“On the Futtaru side, where waves crash, rocks were deposited. It is pretty long, I think around 3,000 feet. It is like a seawall, a natural barrier or fortification,”

“From the coast of Ismahela Hera we call it Kedavaahera. Adjacent to Kedavaahera, it is there towards the Hithadhoo side.” Said Hiyaaz.

An environmental expert said that the formation of the Huraa'gandu was due to the recent bad weather. Similar landmasses had been created before in the Maldives due to storm surges and tidal waves depositing rocks. The expert did however, note that the landmass formed in Addu City was a relatively large one.

The Nalafehi organization of the island, after observing the Huraa'gandu rushed to plant trees in the location. On Tuesday, organization members left for the newly formed island with bags of sand and plant seeds. They returned after planting the seeds.

State Minister Abdulla Naseer said that this is how islands are formed.

“This is how islands originally form through such Huraa'gandu. The deposition of Huraa, Akiri, and sand in one location for a long time, leads the sandbanks to form into islands. They can sometimes erode while turning into an island as well.” Said Dr. Naseer.

He said that if appropriate conditions for the formation of an island is maintained, the sandbank could eventually turn into an island.

“Islands are formed when waves, sea, and other factors allow the deposition of sand over and over to the location.” Said Dr. Naseer.

Previous instances of such island formations include the formation of Udhafushi in Male’ Atoll. The island was formed in a spell of storms during 1987, according to an environmental expert. The island was also formed as a small Huraa'gandu at first before eventually turning into the island known as Udhafushi.

Maldives to benefit from new fund launched at COP26