Parliament to work through Eid holiday on constitutional amendment 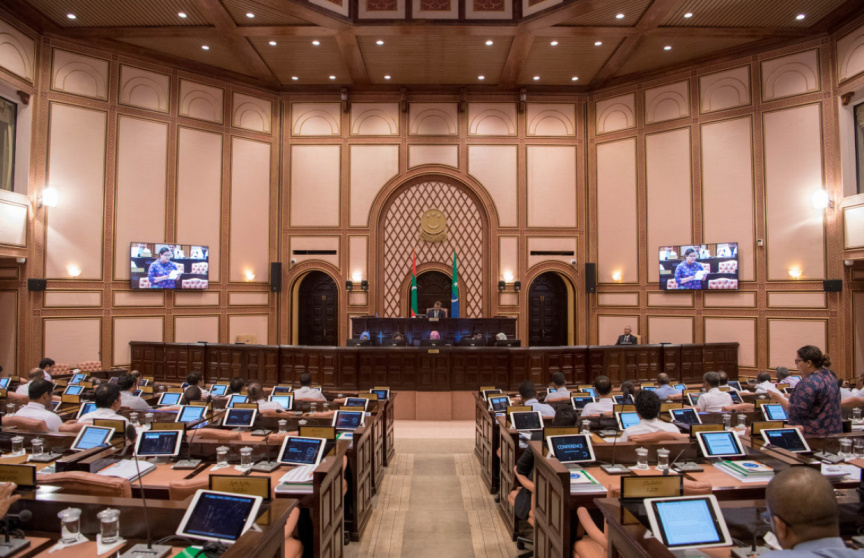 Parliament Speaker, former President Mohamed Nasheed, on Wednesday, announced the Parliament will hold virtual sittings through the Fitr al-Eid holiday to finalize a decision regarding the constitutional amendment to extend the term of incumbent councilors.

At the virtual parliamentary sitting on Wednesday morning, Nasheed said the Parliament will have sittings on May 26, 27 and 28 to work on the bill.

According to the Islamic Calendar, Eid al-Fitr falls on Sunday, May 24. Eid al-Fitr is a three-day holiday. The Parliament had voted to cancel the one-month recess between the first and second parliamentary sessions of the year, and extending the first session to the end of May in late April.

Maldives invoked a state of public health emergency over the COVID-19 pandemic on March 12, and the Local Council Elections, which was originally scheduled for April 4, has been postponed.

The postponement, while necessary to curb the spread of the virus, will create a legal vacuum, once the term of the current councilors expires on June 3.

The government had originally submitted two pieces of legislature to remedy the situation; sunset bill to postpone the election as late as January 6, 2021, and a constitutional amendment to extend the term of current councilors until such time as an election is held.

While the sunset bill was passed by the Parliament in late April, the constitutional amendment was tabled over a difference of opinion within the Parliament over the legality of a constitutional amendment at such a time. And even after both the Attorney General Ibrahim Riffath and Counsel General of ParliamentFathimath Filza provided assurance there was no legal obstacle to making the amendment, some parliamentarians continued to express reservations, arguing that it went against the spirit of the constitution.

It led to West Henveyru MP Hassan Latheef submitting a sunset bill titled “The Special Bill on Ensuring the Operation of Administrative Divisions of Maldives under Decentralization Policy 2020”, which states that all incumbent island and atoll councilors must remain in power until such time as local council elections is held and new councilors elected. It cites the impending expiration of the term of incumbent councilors, and the legal vacuum which councils will be plunged into if Maldives is unable to hold the local council elections in time due to the COVID-19 situation and the lack of specific directive on the Constitution regarding how to proceed during such a situation.

Attorney General and Counsel General, along with other prominent legal experts have stated that a general law cannot be used to override a provision of the Constitution, which puts the legality of Hassan Latheef’s bill into question.

MPs push to ‘take the risk’ and reopen economy