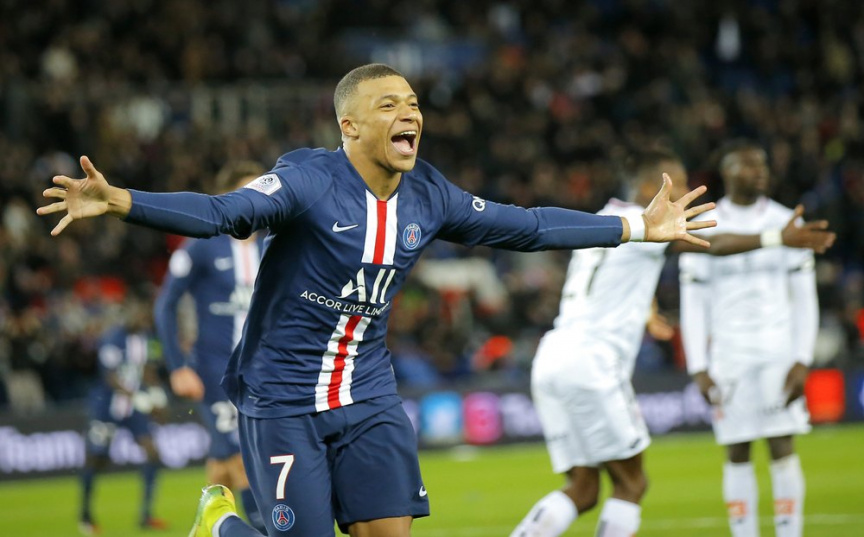 In this Feb.29, 2020 file photo, PSG's Kylian Mbappe celebrates after scoring his side's fourth goal during the French League One soccer match between Paris-Saint-Germain and Dijon, at the Parc des Princes stadium in Paris. (AP Photo/Michel Euler, File)

Instead, there was just a formal ruling from league executives that provided another example of how the coronavirus has upended sports across the world.

PSG was officially crowned Ligue 1 champion on Thursday — two days after the government ruled that the league had to be canceled because of the pandemic.

“We have (acknowledged) the end of the 2019-20 season and we have awarded the league title to PSG,” league president Nathalie Boy de la Tour said.

Handing the title to PSG was basically a formality, with the team 12 points ahead of second-place Marseille with 10 rounds of matches left to play.

But other teams objected to the decision to finalize the league standings based on a points-per-game formula, with Lyon threatening to take legal action after missing a chance to qualify for the lucrative Champions League.

It was PSG’s seventh title in the last eight years — and ninth overall — although this one certainly had a different flavor to it.

Instead of the normal on-field celebrations, there was just muted reaction on social media.

In a statement, PSG president Nasser Al-Khelaifi dedicated the title to the “healthcare staff and to all the everyday heroes on the front line whose commitment and self-sacrifice over many weeks have earned our deepest admiration.”

“We understand, respect and support the decisions taken by the French government to end the championship,” Al-Khelaifi said. “Health, as the government has always said, must be everyone’s priority.”

Star striker Kylian Mbappé posted photos on Twitter of himself raising the league trophy on two previous occasions, but there was no immediate public reaction from Brazil forward Neymar.

Any celebrations with fans, such as the traditional open bus parade, will have to wait until social distancing is over.

Marseille qualified directly for the Champions League while third-place Rennes will enter the qualifying rounds and fourth-place Lille goes into the Europa League.

At the bottom of the standings, last-place Toulouse and 19th-place Amiens were relegated while second-division leader Lorient and second-place Lens were promoted. The relegation-promotion playoff between the team in 18th place in the first division and the team in third in the second division was scrapped.

“We gave our leagues every chance to start again in mid-June,” Boy de la Tour said in a conference call with reporters. “It brings an end to the uncertainty.”

The Dutch league has also canceled the rest of its season, but without any team being crowned champion or relegated. UEFA had initially warned leagues that canceling their seasons prematurely could lead to teams being denied entry into the Champions League or Europa League, but has since softened its stance.

Both the French and Dutch leagues were left with no choice after their governments banned sports events until September. Other leagues, including in Spain, Germany and England, still hope to resume play.

Lyon president Jean-Michel Aulas had argued for a three-week long playoff system to complete the league season— but with PSG already declared champion. Lyon, a seven-time champion, said in a statement that it reserves the possibility to appeal the league’s decision and to claim damages, estimating the club’s losses to be “several tens of millions” of euros.

PSG’s ninth title moves it even with rival Marseille and one behind French record-holder Saint-Étienne. Since 2013, PSG has won the league every year but one, with the exception being Monaco’s title in 2017. The other titles for PSG were in 1986 and ’94.

Mbappé finished as the top scorer for the second straight season, although this time he was tied with Monaco forward Wissam Ben Yedder with 18 goals. PSG winger Ángel Di María had the most assists with 14, ahead of Monaco forward Islam Slimani with eight.

While PSG has reached the Champions League quarterfinals, Lyon was unable to play its second leg against Juventus in Turin after winning 1-0 at home in the last 16.

It remains unclear whether the Champions League will be completed and where games involving French teams would be played if it does resume.

LFP director Didier Quillot says the plan now is to start next season by Aug. 22 at the latest, with the French Cup and League Cup finals from this season carrying over and being played earlier in August “if the government allows us.”

PSG was to face Saint-Étienne in the French Cup final and Lyon in the League Cup final. If those matches go ahead, Lyon and Saint-Etienne can qualify for the Europa League if they win. If PSG wins both, the teams in fifth and sixth place in the standings then qualify.

Next season’s domestic campaigns are followed by the European Championship — postponed this year and rescheduled for 2021 — which could potentially cause a scheduling headache.

Should the government decide that the French league must start later than Aug. 22, then measures might be needed to dispense with the traditional mid-season winter break.

“This hasn’t been brought to the table yet,” Quillot said, but added that “if the calendar becomes difficult in autumn then we would have to adapt.”