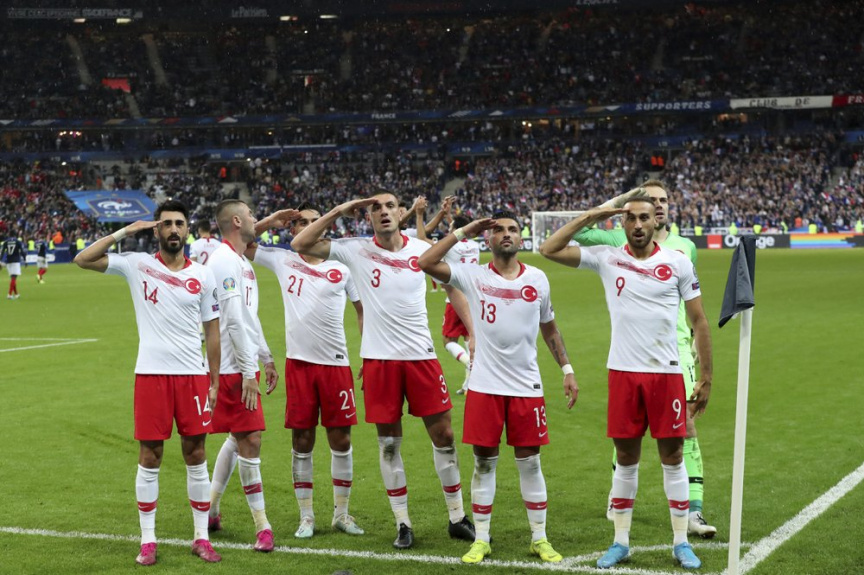 PARIS (AP) — Turkish players defied UEFA with another military salute in Turkey’s 1-1 draw with France in their European Championship qualifier on Monday.

UEFA was already looking into Turkish players’ salutes from during and after Friday’s 1-0 win over Albania. The European soccer federation prohibits political statements in stadiums.

But Turkish players lined up again to show a military salute after Kaan Ayhan’s late equalizer in Paris. Captain Burak Yilmaz was joined by goalkeeper Mert Günok and several other outfield players in giving the salute toward the crowd — in apparent support of the Turkish forces involved in the country’s invasion of Kurdish-held regions in northern Syria.

Defender Merih Demiral urged Ayhan to salute, too, leading to what looked like a heated discussion between the two, but the goal-scorer desisted and made his way back to the pitch.

Ayhan and Turkey striker Kenan Karaman both play for German side Fortuna Düsseldorf, which had issued a statement after Friday’s game to distance itself from “politically motivated acts.”

“Both players stand for values that the club lives by,” Düsseldorf sporting director Lutz Pfannenstiel said.

Maldives among first nations to use Tawakkalna app

Former MP and four others apply to Police Board

JSC investigation into violation of right to counsel

Spain looking for a partner for Ramos in defense