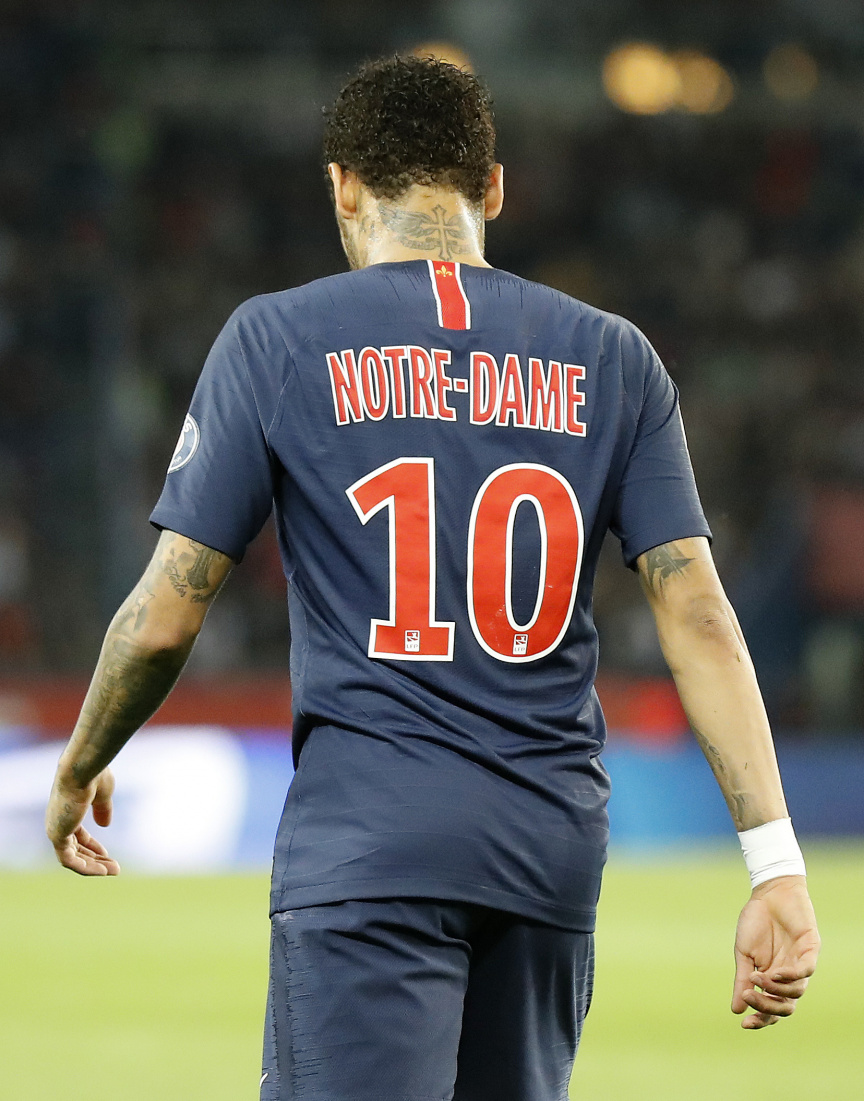 PSG's Neymar walks away during the French League One soccer match between Paris-Saint-Germain and Monaco at the Parc des Princes stadium in Paris, Sunday April 21, 2019. (AP Photo/Michel Euler)

Neymar returned from injury and the prolific Kylian Mbappe reached the 30-goal mark as Paris Saint-Germain celebrated retaining the league title earlier on Sunday with a 3-1 home win against Monaco.

The 20-year-old Mbappe increased his league-leading tally with his third hat trick of the campaign. Neymar congratulated him on his third goal of the night after coming on for the second half. The Brazil star sustained a broken right footin January.

Striker Edinson Cavani also returned from a thigh injury picked up in February, coming on during the second half. PSG hopes to have its front three ready to start next Saturday's French Cup final against Rennes.

PSG players wore commemorative jerseys with Notre Dame written on the back instead of their names, in a tribute to the firefighters who put out the huge blaze at Notre Dame Cathedral on Monday night. There was also a Notre Dame print on the front of the jerseys.

PSG's sixth title in the past seven years was already sealed at 5 p.m. local time, because second-place Lille could only draw 0-0 at Toulouse. Lille had to win to have any chance of catching PSG, but its draw and PSG's subsequent win opened up the gap to 19 points with five games left.

After failing to clinch the title in the past three matches, drawing one and losing two, PSG looked on song at last and kept Monaco — which won the title in 2017 — mired in relegation trouble.

Monaco is 16th and only four points above 18th spot in the promotion-relegation playoff position.

Mbappe pounced in the 15th minute with a fine finish, but did not celebrate that goal against his former club.

He celebrated the second, which came in the 38th, with a forward roll, and got a smile of recognition from Neymar after tapping in his third from Dani Alves' pass in the 56th.

Russia midfielder Aleksandr Golovin pulled one back for Monaco with 10 minutes left.

Although the title was long expected, especially from a side scoring 95 goals in 33 games, it took longer than it should have.

PSG could have won it three matches ago, but drew 2-2 at home to Strasbourg when a win would have clinched it.

Then PSG needed a draw at Lille last Sunday, only to lose 5-1 in the club's heaviest defeat since Qatari investors QSI took charge of the club in June 2011.

A win at Nantes would have sufficed, too, on Wednesday night only for PSG to lose 3-2 .

The 10 goals conceded in three games made for PSG's worst during a three-game spell since 1985.

Saint-Etienne kept the pressure on local rival Lyon in the race for third place and a spot in the Champions League qualifying rounds with a 2-0 win at Reims.

Winger Remy Cabella's goal put Saint-Etienne ahead in the 25th and the second was an own-goal from Belgian defender Bjorn Engels shortly after the break.

Chelsea moves into top 4 after draw with Burnley