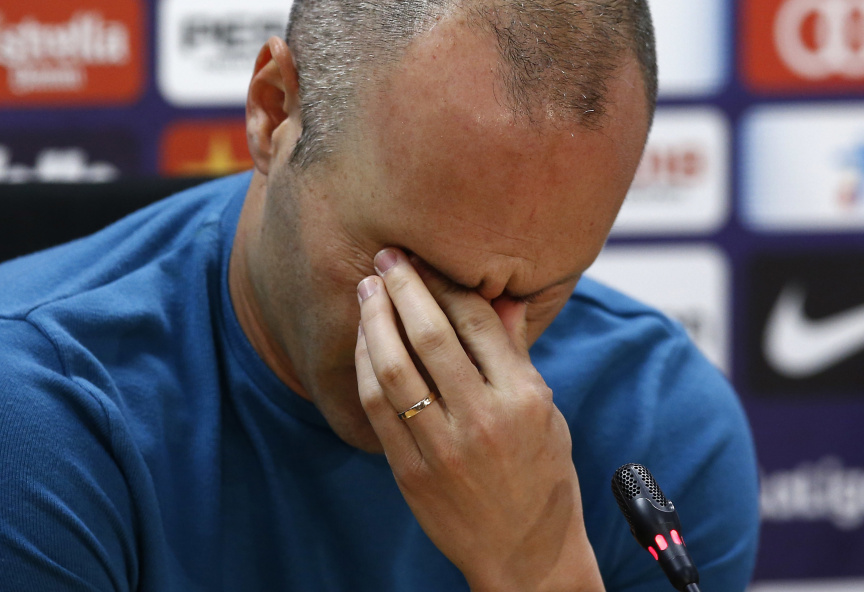 BARCELONA, Spain (AP) — Andres Iniesta took two deep breaths, and then said the words that announced his story-book career at Barcelona was coming to an end.

In an emotional news conference Friday attended by most of his teammates, his family and club executives, the midfielder who has embodied Barcelona's creative attacking style said that he was leaving after 16 trophy-packed seasons.

"I have spent all my life here at this club and it is not easy to leave," Iniesta said after fighting back tears and regaining his composure. "My time here ends this season. I understand that the club that took me in at 12 deserves the best of me in return, and I have given it that until now, but in the near future I won't be able to both physically and mentally.

"The club has placed its confidence," he said. "And I have always said that if I am not able to give my all to my club that has given me everything then I wouldn't be happy."

Iniesta, who turns 34 on May 11, said that he intends to continue playing but did not reveal what his next club will be.

"I have always said that I would never compete against my club, so all the options outside Europe are open," Iniesta said. "When the season is over we will know my choice."

Local media reported that the Spain midfielder will be signing a lucrative contract with a club in the Chinese league.

Lionel Messi and Luis Suarez were his only teammates not present to receive Iniesta's thanks. The club said that they had personal commitments they could not break.

Iniesta left his village in southern Spain to join Barcelona's youth academy when he was 12. He went on to become one of the best players in its history, helping the team win 31 titles — a club record he shares with Messi.

And Iniesta is expected to get one more trophy for the club with Barcelona on the cusp of clinching the league title. The team leads Atletico Madrid by 11 points with five games left.

Iniesta has been a fan favorite at Camp Nou since he helped it start its current winning era by claiming the Spanish league title in 2005 under Frank Rijkaard. He went on to form a dominant midfield pairing with Xavi Hernandez under the orders of Pep Guardiola, and has become team captain.

"It would not have been possible without him so I just say 'thank you' because he helped me," Guardiola said. "People believe the managers help the players, but in a few cases, and I think Andres is one of them, he helped me to understand the game better."

Last year, Iniesta signed the first lifelong contract ever given by Barcelona. And even though he is opting out of that deal, club president Josep Bartomeu said that there were no hard feelings.

Bartomeu said Messi was the best player in Barcelona history for his goals and unmatched talent, but he has plenty of praise for Iniesta, too.

"Iniesta is the most important player of this winning era that started in 2004," Bartomeu told Cadena SER radio on Thursday. "He has been a key part of all the teams under all our coaches, from Rijkaard, Guardiola, Tito Vilanova, (Gerardo) "Tata" Martino, Luis Enrique and now Ernesto (Valverde). He deserves our respect."

Iniesta has shown this season that he is still able to perform at a top level. He has been a first-choice player for Valverde and was still its most decisive attacking midfielder.

The loss of Iniesta is a blow to the entire Spanish league. He is widely admired and loved by fans across the country for his winning goal for Spain in the 2010 World Cup and his role in Spain winning the 2008 and 2012 European Championships. He is often applauded by opposing fans when substituted on the road.

"He is charming, very reserved, and I like people who do their talking on the pitch," Real Madrid coach Zinedine Zidane said. "I only have good things to say about him, admiration for his football and I wish him the best."

This year, Iniesta will play for Spain at the World Cup in Russia. That will likely be his last chance to add to his glorious career with the national side.

But first, Iniesta has five more matches with Barcelona, starting on Sunday at Deportivo La Coruna. He will bid his final farewell at home on May 20 against Real Sociedad.

"To Barcelona's fans, who have seen me grow up and followed every step I have taken, and been with me through the good times and the bad," Iniesta said, "I will take your love with me in my heart."

Barcelona without injured Aguero for 10 weeks

Laporta back as president at embattled Barcelona

CL back in Chelsea's sights as rivals stumble